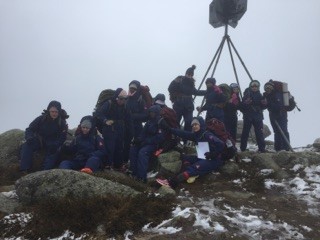 ‘For the duration of a week, the St Margaret’s and Berwick Grammar School Year 9 Cohort went on an alpine hiking expedition through the Mt Stirling area as part of the Endeavour program. In six groups of approximately 14 people we hiked, camped, and cooked through snow, rain, and forceful winds; with severe weather warnings being in place for the area. Temperatures dropped below zero and maximum temperatures didn’t reach over about eight degrees Celsius. Each person had to carry their clothes, food for the week, part of a tent, and gear for use by their group in a sizeable backpack; with most groups walking around 10 kilometres every day. This camp certainly required a considerable amount of physical strength in order to handle the extreme conditions presented. But there is one thing that it required more than anything else – resilience.

To be resilient is to cope with and push through difficulties, challenges and setbacks; basically, anything that would get in the way of achieving a goal – which in our case, was to survive in an unfamiliar and inhospitable environment. If no-one had resilience, everyone probably would’ve given up and gone home upon arrival. The challenges were there right from the start and grew bigger and bigger as the camp continued into the week. The weather grew worse. Muscles began to ache. Emotions built up. People started feel frustrated and stressed. Yet we pushed through these challenges and overcame them to varying degrees through the use of a growth mindset, a positive mentality, and a resilient attitude. The application of these mindsets are what ultimately enabled us to achieve not only the smaller goals we had during camp, but our ultimate goal, which was to successfully complete the camp with positivity and through team effort. I strongly believe that resilience is also a large part of life in general. Life hits us with many challenges that none of us are immune to. With a positive mentality and a resilient attitude, our goals become instantly more achievable.’