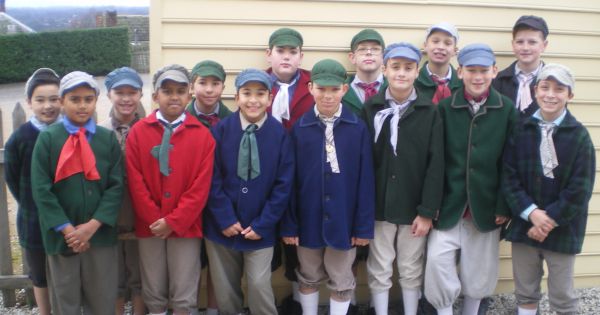 Eureka! Year 5 BGS boys had made it Sovereign Hill in Ballarat. Students attended this three-day experience from July 13 to 15 as part of their Unit of Inquiry, Where We Are in Place and Time.

Upon arrival, students were briefed on the role they would play as part of the 1850s museum. The Year 5 girls from SMS were informed that their education was not very important, as their main ambition should be to find a good husband and be married by the time they were 15. Boys were told their education was a much more vital as they needed to find a good job to support their wife and children.

From there, students participated in classes as they were conducted in the 1850s dressed in costumes suitable for those times. Using fountain pens dipped in ink, students learned to write in the Queen’s copperplate, they recited poems and times tables, girls learned needlework whilst boys completed drawing exercises and everyone learned some valuable sayings such as, ‘Manners maketh the man’ and ‘Children should be seen and not heard.’

Students were taken on underground mine tours where they learned about both the dangers and the spoils of mining for gold. They were given an insight into many of the businesses that were an essential part of 1850s society. Students were also treated to the delights of the Winter Wonderland show, where colourful lights were projected onto buildings and ‘snow’ fell to the ground. The story of the Eureka Stockade was witnessed in the sound and light show, ‘Blood on the Southern Cross’. This helped to give students a deeper understanding of what they had been studying in the classroom prior to attending Sovereign Hill.

The Sovereign Hill excursion provided the boys with a first-hand experience of life during the 1850s and the hardships people faced during these times.