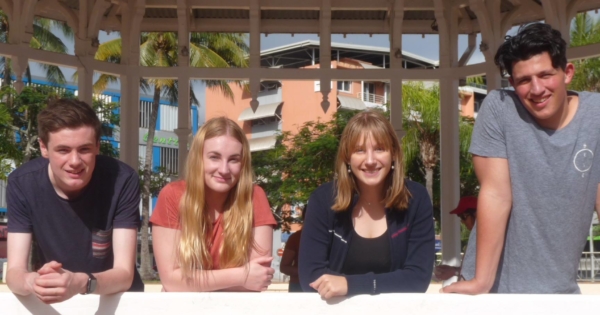 Oliver Ward and Vincent Zappia recently undertook a week-long French language immersion trip to New Caledonia with French students from St Margaret’s School.  Oliver describes below how daunting the process was at first – but how rewarding it turned out to be.

‘There are very few other experiences I have found in life so far, that creates the same feelings of utter terror as travelling to a foreign country, and being told to speak its foreign language for an entire week. The 2018 New Caledonia French Immersion Trip was, to say the least, terrifying. However, as the first few days of the trip flew by and I found myself embraced by warmth of this culture and the incredible language I found myself speaking. Travelling with the St Margaret’s girls was an opportunity to learn and grow from their French knowledge, as was being introduced to the French teachers of SMS and the humour they brought to the trip. By the end of the week, I had grown both a newfound respect for bilingual speakers and my own ability to speak the language. I think, above all, I found that the only way to grow, is to put yourself in uncomfortable situations and hope for the best.’