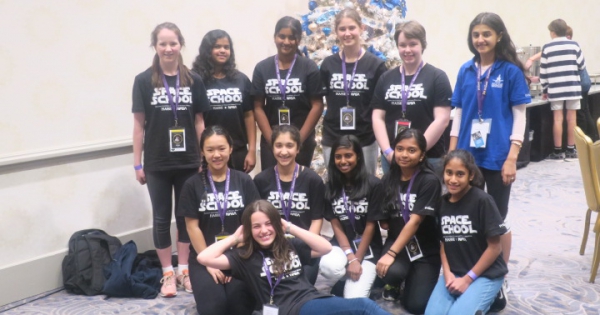 During the summer holidays a large groups of St Margaret’s students travelled to America to learn more about the space program at NASA. Here is an extract of a student reflection from Caitlyn Lewis in Year 8.

Within our duration in Huntsville, we attended Space Camp for a week. Space Camp was located on the U.S Space Centre premises where our cabin, activities and the cafeteria was located. Every day was action packed and full of adventure and wonder. We pushed each other to our limits in order to explore the endless possibilities Space Camp had to offer us. We embarked on missions which mimicked real-life space missions which have happened or are going to happen. The missions were all set up in models that are similar to the space craft that was used or is going to be used for that particular mission. I had the privilege of being the pilot on-board the Orion which is the command module that NASA is currently constructing to take man to Mars.

One of my other favourite activities in Space Camp was all of the simulations. From pretending you were walking on the moon using the MMU trainer or using the 1/6 gravity trainer to mimic what it would be like to have zero gravity they were an immense amount of fun and adrenaline. Astronauts surprisingly train in water as it has the feeling of zero gravity. When we went to the buoyancy pool, a massive pool which was extremely deep, we carried out a group activity which required co-operation and communication to successfully complete.  Although we never got to go to space, we got the opportunity to build something that possibly could. Through many tutorials and with our instructors help each group was able to successfully launch a rocket. Although it may have taken forever to build, nothing could satisfy us more than that feeling we got when it went soaring through the air.

We had countless presentations where it enabled us to flourish with new knowledge and understandings on numerous areas of space from rockets to missions and even exoplanets. Within the U.S Space Centre was a museum that we visited often and we also had the chance to go on 2 rides, G-Force which spun around fast enough for you to slide up the ride’s walls and feel pressure on your chest and there was Space Shot where you went rapidly up then got dropped down really fast repetitively.

After all these amazing activities were carried out it was time for us all to graduate. We each received our graduation certificate, Space Camp shirt and our space academy wings. In the morning we departed for Houston and said farewell to all of the astounding people we met in Huntsville.