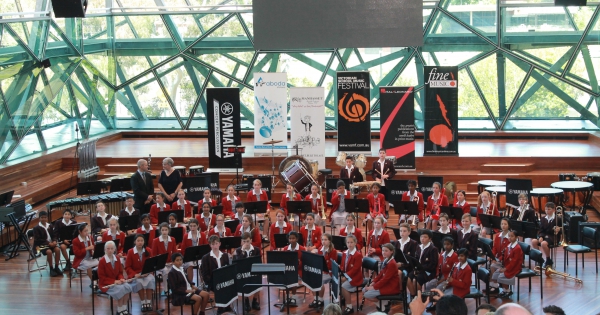 Victorian Schools Music Festival
Earlier this month the Combined St Margaret’s and Berwick Grammar School Junior Concert Bands and the Year 5 Concert Band traveled to Federation Square to perform at the Edge for the Victorian Schools Music Festival. The VSMF invites school bands and orchestras to perform in some of Victoria’s premier performing spaces and our students were thrilled to be able to play in Deakin Edge at Federation Square. This involved a number of extra rehearsals both during school time and after hours for the students as the Year 5 Concert bands and Junior Concert bands from both schools were combined specially for this event.

The students perform for two adjudicators and then receive an on-stage workshop from the visiting chief adjudicator from the United States. Students also benefit from listening to a number of other bands perform pieces of a similar level. Whilst this is not a competition, both bands played extremely well with the Year 5 Concert Band playing next to many Year 7 and 8 level groups and receiving outstanding grades in every criteria.

All of our young musicians are to be congratulated on their hard work leading up to and during this performance.

Year 10 Music Recital
The Year 10 Music Recital was an opportunity to showcase the ongoing development of the music students. The presentation enabled the boys to perform in a formal recital setting, as parents enjoyed an afternoon of music from a range of styles: Mozart’s Eine Kleine Nachtmusik, Australian contemporary jazz works and Disco, soul hits from the 80’s. Throughout term 4 group work was carried out in smaller duos and trios. The catchy melody from One Step beyond by Madness was performed as a duo with Will Morgan on tenor saxophone and Cooper Castricum on bass guitar, while Misty Mountains from The Hobbit was performed by Aaron McDonald on trumpet and Ben Inskip on clarinet. A very enjoyable afternoon of music was had by all.

Year 5 Soiree
On Thursday 24 November the Year 5 parents were treated to a wonderful concert put on by the Year 5 boys. The Music Soiree gave all the boys an opportunity to perform a solo/duet on their instrument. The big hits of Star Wars and Jingle Bells, to name a few, were performed either on the Flute, Clarinet, Trumpet or Trombone. Every boy played confidently and their excellent performances were the result of ongoing practice throughout the year. The Year 5 Concert Band also performed a number of pieces, Atomic Clock, Celestial Fanfare and Escapade.