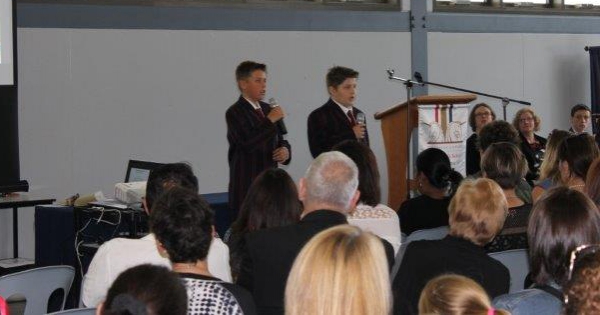 Students from Year 5 to 8 held a Mothers’ Day Assembly at Berwick Grammar School on Friday 29 April. It was fantastic to see so many Mothers and other special guests enjoying a delightful Morning Tea before the Assembly. A photo montage of the boys and their mums was played during Morning Tea and we were treated to beautiful piano solos.

A student from each class shared a reflection about their mum during the assembly, many of which brought the audience to tears and each of their mothers were presented with their reflections and a lovely bunch of flowers. It was a great opportunity for the boys to reflect on the very important role that their mother’s play in their lives.  The Junior Concert Band and the Year 5 and 6 Berwick Blokes accompanied vocal soloists Jesse Busacca and Ned Matin of Year 8 who sang Seasons of Love.