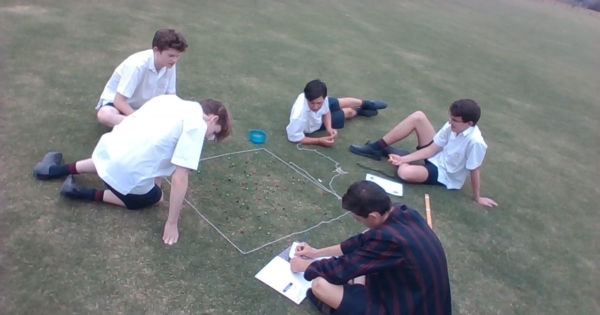 Year 10 students have been exploring the ideas and concepts of the ‘Theory of Evolution by Natural Selection’. Charles Darwin and Alfred Russel Wallace proposed that Natural Selection is the major mechanism for evolution. It explains how species change and become adapted to their environments, as well as how species evolve from existing species.

The students conducted a Practical Investigation that assisted them to model natural selection in beetles that live in grassy environments.

Equipment required for the investigation:

Participants determined which colour; green, black, brown or red is the most effective camouflage in grassy environments. They set off to the oval with a 1m ruler to clearly mark out a quadrat 1m x 1m in a grassy area and allocated each person in the group with one of the following roles: distributor, a timer, a recorder and a collector. The collector was positioned so that they could not see the distribution of the cubes, the distributor spread the beads out over the quadrat evenly, and the timer notified the collector to start collecting the various ‘coloured beetles’ into their container when they were ready. The collector collected one cube at a time and called out its colour to the recorder once they placed the cube into their bucket.