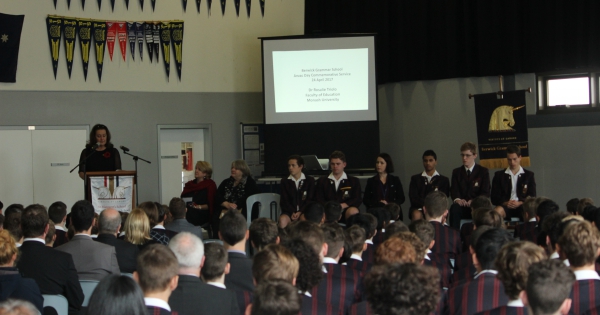 In the northern hemisphere, the British terms are still referred to in some independent schools and universities by festivals in the Church year, for example the Easter Term, the Michaelmas Term, the Hilary Term, the Trinity Term.  In this part of the southern hemisphere, we have been more prosaic.

Term Two has begun after Easter, but Term 2 it is, and maybe in our secular world, that was inevitable and perhaps a safe way of being inclusive, in our rich diversified community that is Australia. We have celebrated our being Australian, right at the start of Term 2, by holding our Anzac Assembly, the day before Anzac Day, so perhaps we can call this the Anzac Term!

Our assembly was shaped by a number of our splendid students: in the Drumline, eight boys from Year 8 to 12, led by David Somers (Year 12), in the Senior Concert Band, another nineteen boys from Year 8 to 12, with Aaron McDonald (Year 11) playing the Last Post and the Reveille, the inaugural winner of the Anzac Prize for his fine Anzac Reflection which he read aloud, a well-crafted and very moving poem, Rasridh Islam (Year 8), and the senior students who ran the assembly in their various roles: Co-Captains Sean Dack (Year 12) and Noah Kent (Year 12), Year 12 Captain and manager of assemblies, Michael Battye (Year 12), and those who spoke and read, Marcus Neil (Year 12) and Abdul Mohammed (Year 12).  Our Guest Speaker, Dr Rosalie Triolo, President of the History Teachers Association of Victoria and Senior Lecturer in the Faculty of Education, Monash University, commented on the very mannerly and well-presented young men who gave her their undivided attention as she spoke about the ways in which our own lives have been shaped by the astonishing level of sacrifice, by a young country with a small population in The Great War years, and referenced the nine names on the Honour List of the original Berwick Grammar School, which closed in 1928, and commemorated with others in our famous avenue of elms in Berwick. She challenged the historically minded to research those names and any ongoing links in our community, as she measured for us the magnitude of the impact of the First World War in Australian lives then and in our lives now. We will remember them.

This term is, above all, the term for getting on with the business of learning, and while for some this will include being part of other interesting things going on at BGS and elsewhere, it is for all students, and for all teachers, the term which will culminate in examinations (or SACs), and formal reports.  It is therefore a very focused time, for concentrating on targeted learning goals, on making progress in learning, on asking good questions, on thinking things through, on developing skills which will turn information into knowledge, and knowledge into understanding. That happens only with perseverance, wherever we are on the ability spectrum, whatever our age.  Amazing things can happen if we believe in ourselves, believe in the opportunities to learn that are on offer at BGS every day. Labore – with effort!