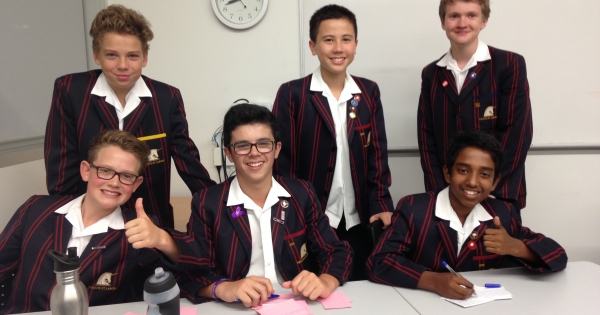 Not all the learning that goes on in schools happens inside the timetabled lessons, as wise educators have been noting for many years, whether this is the hidden curriculum (GH Bantock) which drives the acculturation of norms and values, or the student-negotiated curriculum whereby students avail themselves of opportunities presented to them. In the last couple of weeks, as you will read in some of the specific reports, the boys of Berwick Grammar have been pushing their own learning boundaries outside the traditional classroom in a number of ways.

At our very successful House Swimming Sports, it was not only Richards as the winning House, led by the Head of House, Peter Jennings (Year 12), and supported by Ms Debbie-Rae Cameron as House Convenor, which had reason to celebrate their red domination at the pool, but the seamless conduct of that event relied on students, whether swimmers, officials or spectators, to make it such a happy and successful occasion.  Boys lining up for their ribbons were winners, as place getters, but so too were student photographers, such as Clive Brace (Year 12) and Angus Bares (Year 9), marshals such as Munir Kamil (Year 9), and all the Year 12s who balanced that very difficult line between engendering House spirit, complete with wigs and tutus, in the presence of Where’s Wally, a Smurf, and a Baywatch Lifeguard, and leading their Houses with an eye to proper decorum in a public space. They managed that superbly.

In the last week or so, we have had boys out at leadership functions run by the City of Casey, including Oliver Ward (Year 9) and James Agahi (Year 10) who attended the Casey Youth Forum, to contribute a student voice on local affairs, and Abdul Rahim Mohammed (Year 12) spoke at the Student Leaders Reception, attended by our School Captains from all three campuses. Abdul’s own account might well inspire others to ‘have a go’:

Last year, I was one of the 10 students from Casey to be selected for the Australia Day Study Tour. It’s a council youth program run by the City of Casey for students who have an interest in the political system and/or students who are active in their community. It was an opportunity that I just went for, not expecting much and I was extremely wrong. The program gave me an experience I thought was never possible. We got the chance to travel and learn about the three levels of government in a way that was never dull. For example, a four-day trip to Canberra and meeting people like the Prime Minister, Malcolm Turnbull. After the program, I thought, ‘Well, that was fun for a while’ and I felt that my leadership role as an ADST recipient was finished. But no, the wealth of opportunities that presented themselves was extraordinary, like representing the local youth community in National Youth Week and talking to Federal MP Anthony Byrne about the challenges that the young people of Australia are facing, going onto Casey Radio with Councillor Stapleton to speak about my school and my journey as a leader, just to name a few of those opportunities.

Boys have been debating with success, arguing at the first DAV competition for the year, playing in chess tournaments, playing SIS sport in the current round of competition in soccer, cricket, handball, following up on community projects with our neighbours looking into better public facilities in Tivendale Road, engaging with environmental challenges, getting ready for next week’s big SIS concert, joining an AV leadership group, rehearsing the School Play, participating in the Model United Nations Assembly, offering up their own views on the school’s Values, Vision, and Mission Statements through the work of the Students’ Representative Council, or getting ready for the school trip to China at the end of the term.

All these learning opportunities, and more, are part of the rich world of Berwick Grammar School life, but this is the timetable and curriculum that boys can write for themselves, according to their interests and their abilities. The key to this strand is being curious about the world in a spirit of enthusiasm and optimism – that’s why the boys who respond to those opportunities, for participation and for discovery, are leaders of themselves, expanding their own horizons, through the opportunities afforded by Berwick Grammar School. It has been a very busy and productive term, and we look forward to more, even deeper and broader, learning in Term 2 with a particular focus on respectful relationships, now that we have been accredited as a White Ribbon School, thanks to the energy of Coordinators Ms Alice Carlisle (Year 8) and Mr Anthony Smith (Year 11), and the cognitive learning in the classroom that is our core business, our reason for being.