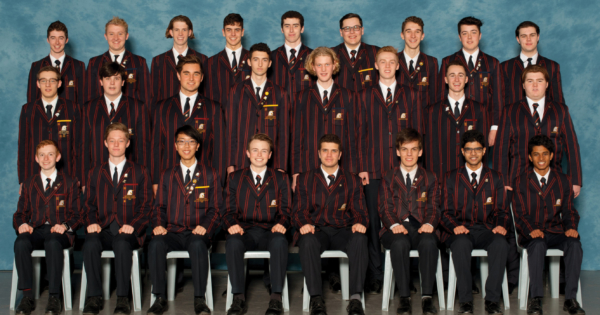 Our Men in the Arena

One of my favourite quotes comes from the great poet Robert Frost. Many of our boys will know of the works of Frost largely due to his poem ‘The Road Not Taken,’ which utilises a vivid metaphor of a fork in a road to muse on the nature of decisions in life. Frost once said, that ‘whilst history does not repeat itself, it sometimes rhymes.’ For those of us who work within schools, the natural rhythms of the school year play out much like the seasons. Each farewell is different but there are familiar refrains where we draw upon our experiences of the past to say goodbye to the present. This is never more apparent than when we consider the end of Year 12.

From fresh beginnings at the start of each year or term to the firsts of the lasts as a graduating Class begin the cycle of farewells. As such, these first few weeks of the final term of the year are filled with a range of ceremonies and rituals which signifies the end of the year for Year 12 and the assumption of School Leadership for the Year 11’s.  Our final assembly for Year 12 of last week will be further extended into our Valedictory Dinner and Speech Night this week, each of which will provide an opportunity to farewell the Class of 2018. Although my time at the School has been remarkably brief in comparison with all of these boys, some more so than others, farewells remain times tinged with sadness but also the excitement of fresh possibilities. Our Berwick Grammar School VCE Class of 2018 are a fine group of young men. They are cohesive, vibrant, supportive, good humoured and reliable. They have worked hard this year and are set for all the challenges and triumphs that can be associated with endings and beginnings. We wish them all the best as they depart and thank them for their contribution. At their Final Assembly, I shared these words with them from Theodore Roosevelt. We wish them all the best for their performance in the arena of examinations and every rich blessing as they strive valiantly to lead honourable, fulfilling and rewarding lives in the various arenas of life.

‘It is not the critic who counts; not the man who points out how the strong man stumbles, or where the doer of deeds could have done them better. The credit belongs to the man who is actually in the arena, whose face is marred by dust and sweat and blood; who strives valiantly; who errs, who comes short again and again, because there is no effort without error and shortcoming; but who does actually strive to do the deeds; who knows great enthusiasms, the great devotions; who spends himself in a worthy cause; who at the best knows in the end the triumph of high achievement, and who at the worst, if he fails, at least fails while daring greatly, so that his place shall never be with those cold and timid souls who neither know victory nor defeat. ‘

Excerpt from the speech ‘Citizenship In A Republic’ delivered at the Sorbonne, in Paris, France on 23 April, 1910