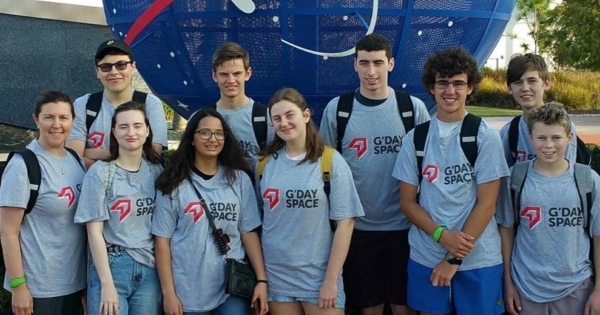 December 2018 saw the inaugural expedition of a group of BGS and SMS student to the USA for a STEM immersion. 10 students ranging in age from 16 to 18 had the opportunity to visit the Kennedy Space Centre in Orlando, USA.

Here they experienced working on a space ship under the influence of zero gravity, they problem solved emergency procedures using coding on Mars and the conducted actual research on which plants are the most effective to grow on Mars for future colonisation expeditions.

We saw an actual Saturn rocket and were amazed at the actual size and we touched real moon rock! We toured the launch sites including that for the SpaceX rockets and sadly, just missed out on seeing a live launch – the launch was delayed due to the contamination of the food for the mice experiments. We met astronaut Anna Fisher who said she would be happy to come to Melbourne if we invited her!

Following Orlando Florida we went to San Francisco to investigate the engineering of the Golden Gate Bridge and Explore the USS Hornett. This was the ship that was used to recover the Apollo 11 astronauts when they landed after first standing on the moon in 1969.

Finally, a visit to LA for an immersion in physics at the Knott’s Berry Farm rollercoaster park – and priority riding of the roller coasters! We couldn’t go to LA without a visit to Disneyland and Universal Studios – think Space Mountain and Harry Potter World!

The only criticism of the trip was….. it was too short!