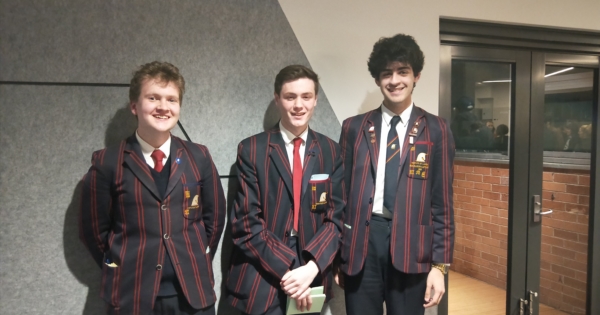 While they were unfortunately knocked out of the competition, they can still celebrate being the best team in the Berwick region at the end of the DAV Schools Competition. They emerged undefeated at the top of the A grade ladder, which is an amazing achievement considering that two thirds of the team are only in Year 11.

While their success can largely be attributed to the sheer amount of hard work and effort that these boys put into each debate, the incredible cohesion they demonstrated throughout the season cannot be understated. This team has displayed many touching and heartfelt moments of friendship and mutual support, serving as a positive example to their peers in the program. They were always there for each other and always worked collaboratively to achieve the best possible outcome.

While it is not our usual practice to raise the accomplishments of one student above others, of all the members of this team, James Agahi deserves a special mention. As the team’s Captain he has shown some incredible leadership, both this year and throughout his senior years at school.  He has expertly balanced his VCE commitments with the demands of the debating program (a commitment which many are not willing to make). As our most seasoned debater, and given that this was his last DAV Debate, James is thanked for everything he has given the program in his years at Berwick Grammar. As a school that prides itself on ‘Growing Good Men,’ James serves as a resplendent example of a ‘Good Man,’ one that clearly embodies and exemplifies values of ‘courage,’ ‘character,’ ‘curiosity’ and ‘respect.’ Without him, we could not have formed an A Grade team this year, let alone formed one who were as successful as these boys.