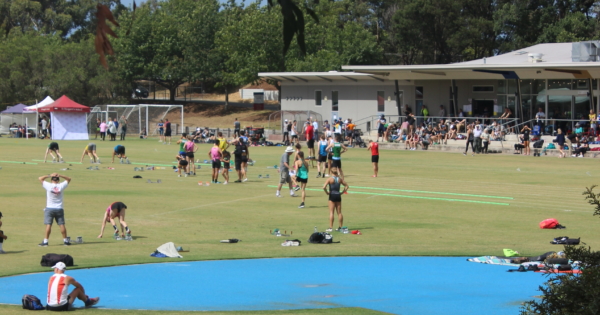 On Saturday 23 March, St Margaret’s School had the opportunity to host the Victorian Athletic League’s inaugural Berwick Gift. Gift running has a rich history in Victoria and Australia, with the famous Stawell Gift dating back more than 130 years, predating the Modern Olympics. Gifts are traditionally held on grass tracks and athletes are provided a mark or handicap according to their ability. The handicap system ensures that all have an opportunity to win their chosen event, regardless of their age. The aim for the Berwick Gift was to represent inclusiveness, gender equality and elite performance.

As the second last meet before the Stawell Gift, there was a strong turnout from the athletes with approximately 550 race entries. In addition, we sought to add two feature school girls’ races to the program, the 120m and the 800m events. Girls from GSV schools as well as local schools were invited to participate and we are proud of the St Margaret’s girls who competed: Abigail Johnson, Tara Matheson, Amy Herbert, Sophie Castricum, Claudia Eibl and Chloe Liew.

Our beautiful school grounds were on show to many from the community and the day was a huge success with many athletes and officials giving glowing praise of the running surface. St Margaret’s spirit was also evident and I thank all staff, students and particularly our running coach Mr Chris Macdonald who helped to make this event possible. We hope that it is the first of many such events.