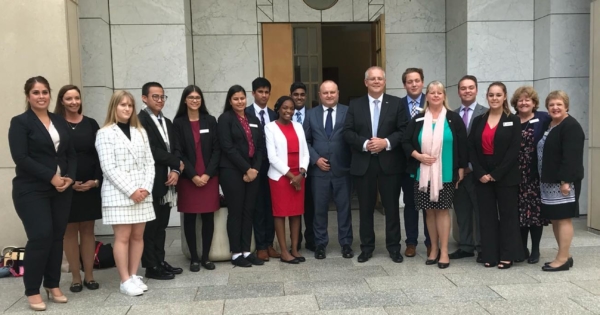 This year, I had the privilege of being selected to participate in the Australia Day Study Tour, along with ten other students from the City of Casey. The purpose of the program was to give students interested in politics and law the opportunity to learn about government at three levels: local, state and federal. The tour commenced with the local stage, in which we learned about the City of Casey council. After a tour of the municipality and some presentations on the work of the council, we were able to have dinner with the councillors themselves and attend a council meeting.

One month later, we travelled into the CBD, to learn about how state government operates. As well as participating in a tour of Parliament House, we had the opportunity to meet various politicians, including Dr Tien Kieu, the Hon. Gordon-Rich Phillips and the Hon. Gabrielle Williams. It was inspiring to learn about their accomplishments and journeys leading up to politics. Following this, we were able to watch Question Time (which was highly entertaining)!

In April, we left for a four-day trip to Canberra. After a 4am start, we landed in Canberra nice and early, kicking off our tour with a visit to the National Capital Exhibition Centre. Here, we learned about the essential history behind Canberra’s design and political life. We then ended the day at the Australian War Memorial and were able to watch the closing ceremony.

The following day was by far the most eagerly awaited of the trip – Our visit to Parliament House. We were able to participate in a tour and watch Question Time (as we did at state day) and it was interesting to see so many notable politicians in person that appear frequently on the news. We were then given the opportunity of meeting the Hon. Scott Morrison and made sure to ask him lots of questions about his job as Prime Minister.

The day after that had a focus on visiting various tourist attractions and seeing the sights of Canberra. This included a ferry cruise on Lake Burley-Griffin, going to a virtual reality show, and enjoying a tour of the Australian Institute of Sport. We also had the privilege of having afternoon tea at the Embassy of Timor-Leste, listening to a presentation from the country’s ambassador.

We spent the morning of our final day at the Electoral Education Centre. Following this was a tour of the High Court of Australia, which I found particularly interesting, due to my interest in law. We then visited a new exhibition at the National Gallery of Australia, before rounding off the day at the Museum of Modern Democracy, then heading home.

I would like to thank Mrs Atkins for nominating me for this incredible experience and I would recommend the tour to girls in younger year levels. I made many amazing friendships with other students and am further inspired to pursue a career in law/politics as a result of the program.