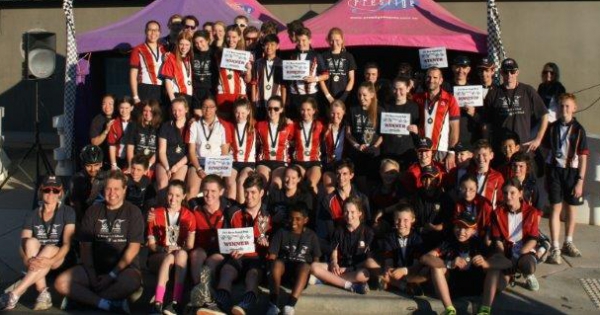 Weather conditions for this year’s event last Sunday were wonderful in stark contrast to pouring rain last year. St Margaret’s and Berwick Grammar squad entered ten vehicles spread over six classes (there were eight classes in total). After one hour our best positions were leading in one class and second in two others. At this stage our all-conquering senior girls team had experienced mechanical problems with their vehicle and one of the riders had been involved in a serious crash which took her to hospital and they were six laps behind. The senior boys and our middle secondary team were both third. Our shining light was our parents team in the veteran class which was leading strongly.

With half an hour to go in the race things had changed dramatically with veterans, senior boys, middle secondary and senior girls all leading their class and three other teams in second position. It seemed time to relax and enjoy the finish but in the space of five minutes it all went wrong, the senior girls with Olivia Weston riding were involved in two crashes both caused by the same opposing school, the middle secondary team blew a tyre as far from the pits as possible and the senior boys back wheel actually came loose and fell out near our middle secondary vehicle. All three were in danger of blowing their leads but the brilliant pit team of parents and students did a speedy cross country dash to repair the two vehicles and Olivia after a quick injury and vehicle check decided to return to the fray.

The end results were spectacular with senior boys (PerZeus), senior girls (Pegasus), middle secondary (Chrysaor) and veterans (Scorpius) all winning their class and three other teams (Zeus, Electra and Taurus) being runners up. Once again our team spirit, organisation and enjoyment factor were all at the highest level. Particularly pleasing was the way the senior boys and several other teams looked after their vehicle with no crashes at all. There were also many wonderful riding performances from some of our newer and younger riders. It was also so pleasing to see the strong representation from past students in one of our community teams.