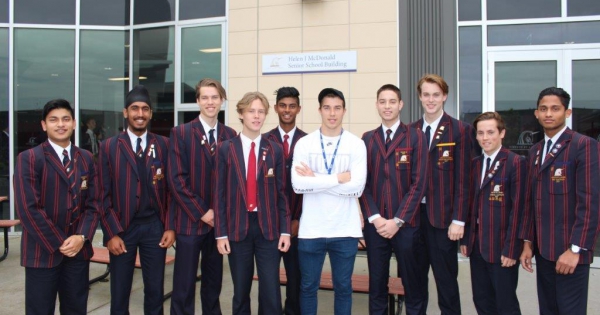 The senior boys at BGS were privileged to have Zach Merrett from the Essendon Football Club visit on Thursday 1 June.

Zach is 21 years old, and grew up in the country before completing his secondary schooling at Melbourne Grammar. He was selected by the Essendon Football Club with pick 26 in the 2013 AFL National Draft. He debuted for the Bombers in the opening round of the 2014 season and was nominated for the NAB Rising Star Award later that year.

Since his debut he has played nearly 70 games for the club, winning their best and fairest award, the Crichton Medal in 2016. His magnificent season was capped off by polling 19 votes on Brownlow Medal Night, putting him along the likes of players such as Nick Riewoldt, Robbie Grey, and Marcus Bontempelli.

Zach has had the honour of captaining Essendon on match day, leading them to victory over the Gold Coast Suns, one of the Dons three wins in 2016. Currently he is one of two Vice-Captains alongside Cale Hooker, and last year was also named Vice-Captain of the AFL 22 under 22, a team made up of the best prospects in the league under the age of 22.

Zach has also emerged as a popular selection in the game of Supercoach, becoming one of the top performing midfielders averaging in excess of 110 points per game.

In recent times Zach has been trying to raise awareness for greater research and understanding of Multiple Sclerosis and has witnessed firsthand the impact of the condition.

In light of Zach’s passion for fundraising for MS, Berwick Grammar School has offered to support Zach Merrett’s fundraising page with our Social Service endeavours in Semester 2.