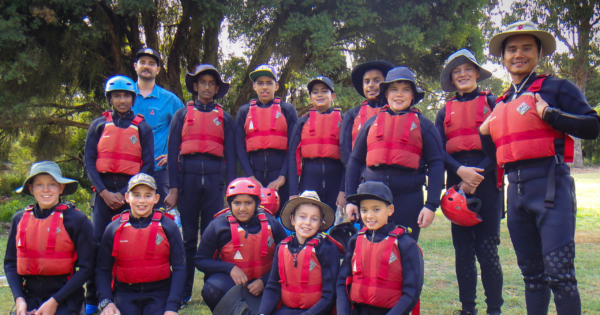 We started the new 2020 school year with the Year 7 Camp at Camp Eildon. What a blast it has been!

After saying our sometimes-teary goodbyes (mostly from the parents) we were off towards our great adventure. A bunch of newly minted Year 7 Berwick Grammar School boys, who mostly did not know us, the teachers, and barely knew each other, settled for the long drive. They were full of questions. “How far is it?” “What are we going to do first?” “Have you been on this camp before?”

Our first task was to empty our overloaded suitcases into the limited space of the trekking backpacks we were given by OEG. The reality of camping hit home very quickly. Not everything we brought from home could fit. Somethings had to be left behind. Decisions! Decisions! Comfort food i.e. lollies, or comfortable feet i.e. a third pair of shoes?

After the packing, we then moved on to lunch and then setting-up our tents. In no time at all dinner time was upon us. The students were responsible for cooking all the meals and this was going to be their first. We had spaghetti and meatballs. Again, it was a new challenge for some of our students, which in the end, they successfully managed. When our bellies were full, we then joined the other groups on the oval for large scale activities and games. The ‘Watermelon Tai Chi’ was simple but a hit with the students.

The next day was our first hike with full backpacks. The two kilometres trek was arduous for some students, but they all felt a sense of achievement after completing it. Then we got going with what was now becoming a bit of routine. Tent set up, meal preparation, eating, cleanup and then an activity of some sort.

Over the next few days, we completed a range of activities including a high ropes course, river rafting and mountain-bike riding. I think we all agree that the rafting on the Goulburn river was the highlight of the trip for the students. We were in two rafts and the students could jump in the water in a certain section of the river. We ‘raided’ the opposite raft, ‘battled’ the other raft with water sprays and generally had a whale of a time.

We also faced some difficulties which gave the team a chance to learn about adaptability  and focus on the Term 1 theme GRIT. For reasons beyond the group’s control we could not do our bike riding when it was scheduled and consequently, we had to trek 2km with backpack to return to base camp. Needless to say, the mood was then at a low point. However, the team certainly showed resilience and adaptability and got the job done. We had our bike ride the next day.

All in all, it was a fun time with lots of learning opportunities – adaptability certainly became the catch cry of our group – and it helped put the new young boys on the path of ‘Growing Good Men’.