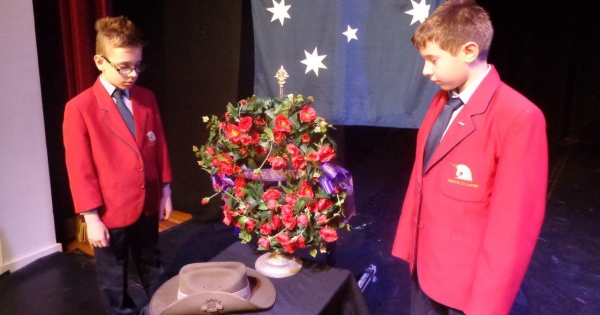 The bugle started to play and tears came to my eyes. While the trumpet tune played, we remembered the soldiers who fought in the war. The pictures shown on the screen made me have flash backs in my mind of the stories we had heard. I felt proud to be able to think of these soldiers in my memory. Soon some people started to talk and I felt grieved because they reminded me of that sad time. There was a wreath from each class with poppies on them. The girls passed them along and handed them to the boys who were standing next to the flag. The last song was Advance Australia Fair. The Year 4s sang the first verse, and the rest of the school joined in for the second verse. At the end of the assembly our teachers congratulated us on doing such a great job on organising the assembly.

Have you ever sung in front of a whole Junior School, singing an Anzac song? Well that’s what we had to do.

We ended our perfect day with an Anzac Assembly on Monday 18 April 2016. We began our nerve-racking speeches when everyone sat down and Jamie stared us off beautifully. Soon it was our turn to sing and our hands were shaking like an earthquake. It was an honour to sing in front of the Junior School. Only eight kids were chosen out of 40 students and it was a privilege to sing with a friend.

As we got up on the stage we were more nervous than ever. Our hearts were pounding a million miles an hour. We began to sing the first few words and everyone in the audience’s mouth dropped to the ground. They thought we were absolutely tremendous. Our parent’s eyes were watering with tears because it was lovely. Everybody cooperated very well.

Soon The Last Post was played, with a one-minute silence. We were all proud of those men and women who sacrificed themselves for our country. We did this assembly for people who fought for us. We put down wreaths to honour the dead. We will continue to commemorate them every year.