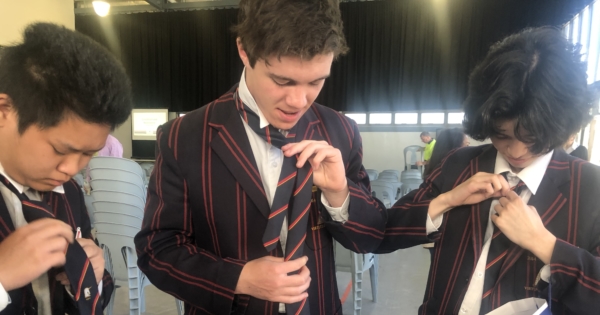 It is an important moment for the Class of 2020, when they are officially inducted by the school into Year 12.  In this ceremony they are given their Year 12 ties, Year 12 Badge and any formal badges of office. It officially represents their formal step into leadership of the school.

School Captains Oliver Ward and Navaal Saeed marked the occasion with a speech and the group was ably led through the pledge by their chosen Year 12 Captain, Vincent Zappia.

We also celebrate how much the boys have grown by showing a picture of them – either as children or one of their earliest school photos.

This year, we also officially inducted the Class of 2025 into the Berwick Grammar Community.  Each boy was applauded on the stage as he received his House Pin.  We also read out to the audience what he was most looking forward to as he begins his time at Berwick Grammar.

There was a beautiful symmetry to these two events taking place together, and all who were involved are thanked for making it a special day for so many.