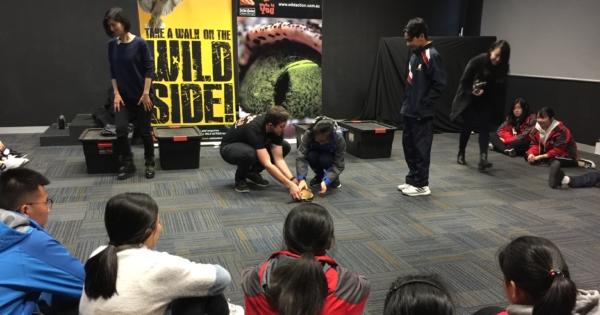 The buzz and excitement continues’ at Berwick Grammar School!

This week we welcomed 30 international students from China! They explored the culture and education of our School. They also provided an invaluable experience for our students as they were able to exchange communication in both English and Chinese languages.

The guest students as well as the Year 7 cohort attended a ‘Wild Action Incursion’ where ‘The Zoo came to them!’ The experience involved the opportunity to learn about and handle some Australian animals!

The organization was founded by Melbourne University Zoologist Chris Humfrey in 1994 whose mission in life is to protect nature and animals.

Robbie, whom has a Zoologist background presented some of the following Australian animals:

Owl: Barn Owls are the most cosmopolitan owl species in the world!

Frilled Lizard: Now threatened in parts of Queensland due to habitat loss.

Crocodile: They have 66 sharp teeth and can continue to grow them back!

Students eagerly sat in a circle and were able to interact with the animals as instructed by Robbie.

Both the Year 7 students as well as the international team were inspired by the experience.