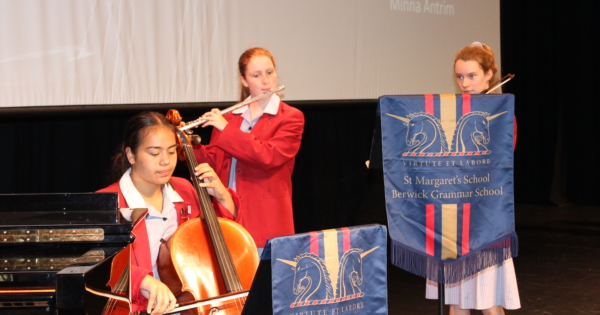 The current generations of women are beginning to see the rewards of the trailblazers who came before them; those who challenged, questioned, advocated, marched, the list goes on. We feel privileged to be the Heads of Cunningham, Gipson and Campbell because we see the positive impact this cultural change has had on a day-to-day basis at St Margaret’s.

Nonetheless, reading widely over the International Women’s Day 24 hour news cycle afforded us with a rude awakening. Prominent Australian women spoke about their lived experience and a consistent message arose that Julia Gillard summarised well: It wasn’t until I was really at the apex of my career as prime minister of Australia that I felt the intensity of gender backlash when a woman steps forward to lead.

This sentiment was echoed in a range of articles jolting us from a sense of appreciation for the nurturing environment established at St Margaret’s to the reality of the next generation’s future. Our role as students, parents and teachers is not only to continue to foster a space where women can succeed, but an environment where women can lead without needing to justify their position or the credibility of their vision.

At St Margaret’s, we exist in a special space in education. We exist in a space where young women can flourish, be championed and achieve better outcomes. For example, in 2010 Veronica Cabezas’ found that girls at single-sex schools perform better academically than their counterparts in coeducational schools. Dr Rosemary Salomone from St John’s University further highlights the social benefits of a single-sex education: All-girls settings seem to provide girls a certain comfort level that helps them develop greater self-confidence and broader interests.

We consistently see these academic and social benefits in our classrooms. But is this enough to combat the real world where women experience gender backlash?

We believe that creating an environment where women support women and men support women is the first step to preparing our students for life outside of St Margaret’s. As Melbourne’s Lord Mayor Sally Capp stated in The Age: I am now in this stage of my career where I am saying me going into these roles is not enough. I have actually got to be part of that slingshot that propels women into these roles.

This slingshot culture is what we foster amongst staff and students and why we teach just girls; so women lead and succeed in their individual paths but also reach back to support those behind them