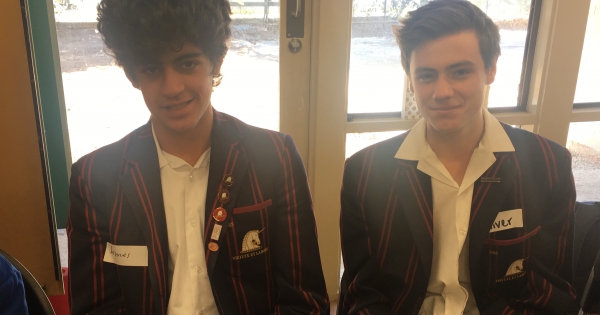 Berwick Grammar School boys have been busy fundraising in the past few weeks. Boys in the Student Representative Council at each year level have done a terrific job beginning to schedule a number of events to raise money and awareness for various causes in 2017.

Our first free dress day this year was aimed at raising funds for the Cancer Council. We are very proud to have contributed not only over $400 to the Casey Relay for Life but also to have staff and students participate in the 24 hour walk at Akoonah Park on 3 – 4 March. The St Margaret’s and Berwick Grammar School team has a proud history with this event, and this year more members of the Berwick Grammar community participated than ever before. Congratulations to all the boys who gave of their time and wore their purple shirts with pride and to team leader Ms Carole Reed, Head of SMS Junior School for her passionate leadership.

We also held a Pyjama Day on Friday 17 March in honour of World Sleep Day.  Over 90% of people do not get enough sleep.  This has a terrible impact on how we function – especially as learners.  Sleep is important to be ready to take on new information in class, to transfer what is learned into long-term memory, and to be creative.

Pyjama Day followed a week of activities and quizzes in CARE learning about the importance of sleep.  We discussed many interesting facts, such as how the idea for inventions like Google and the Periodic Table came in dreams, and that humans are the only mammals who actively delay sleep!

Many of the boys (and the staff) got into the spirit of the day wearing onesies and pyjamas of all kinds.

We also had a number of boys participate in local government functions, having a say in their local community.  School Captains Noah Kent and Sean Dack were invited to the Casey Student Leadership function, and were joined by our Year 6 Captain Jake Giddins.  The boys particularly enjoyed hearing from Kate Austin, CEO and Founder of Pinchapoo, a non-profit organisation that encourages you to pass on the toiletries you don’t use when staying in hotels, so that they can be redistributed to people in need. Not only did the boys feel like this was a valuable cause, they were also inspired by Ms Austin’s message – ‘be unapologetically yourself’.  Only in doing so, can we provide real leadership.