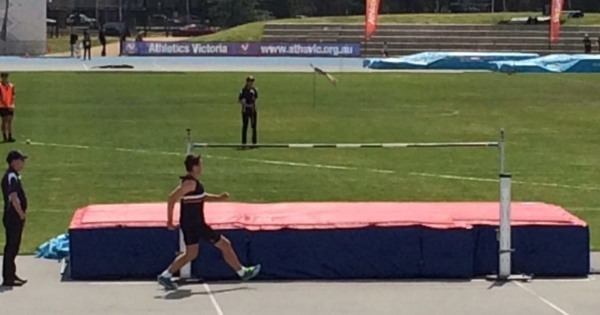 Across the Melbourne Cup weekend Berwick Grammar School, Year 9 student and Sports Captain, Matthew Merrilees was busy running jumping and throwing as best he could, representing BGS at the 2018/2019 Victorian All Schools Track and Field Championship at Lakeside Stadium in Albert Park. After dominating the SIS athletics carnival earlier in the year, Matthew proudly represented the School in his chosen events of High Jump, Discus and 200 m.

Matthew threw a Personal Best in the Discus on Friday night with a throw of 38.62m placing him 7th. On Saturday he ran the 200m in a Personal Best time of 24.66 which saw him miss the final by 0.29 of a second placing him 10th fastest in Victoria for his age group.

On Sunday he jumped a Season’s best of 1.74 m in the High Jump placing 7th.

Matthew’s ability to produce personal best and season’s best results in all three events further cements his growing reputation as an athlete who thrives on the big stage. Well done Matthew, the staff and students at BGS are extremely proud of your efforts in showcasing our School to the rest of the state!