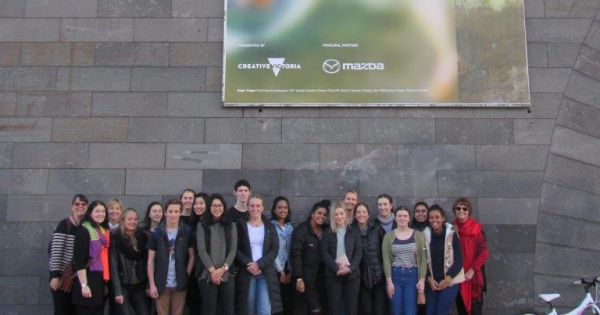 At the end of the mid-year holidays, VCE French students from both SMS and BGS spent a very productive two days at Queen’s College, Melbourne University, honing their language skills. The focus for the Year 11 tutorials was on building confidence in speaking and the Year 12s participated in workshops which launched their preparation for their Unit 4 Detailed Study. Enjoyment of French food was the usual highlight, with a range of delicious French pastries on offer for the afternoon break, the French ‘goûter’. Students also enjoyed an evening visit to the French bistro “Paris Go” for dinner `a la française’.

Ms Kristen Turner, Assistant Head of Languages at BGS, was a welcome visitor to the camp. She observed an afternoon workshop and joined the group at the French restaurant in the evening. She was delighted to be as able to touch base with the boys and catch up with many of the SMS girls having been their leader on the French component of the European Tour earlier in the year. The French exchange student, Kassie Wyrwinski, was also able to participate in the camp and enjoy the unusual experience of a stay in residence at Melbourne University.

In the final workshops, both groups worked in pairs to present and discuss paintings by Degas before their excursion to the outstanding exhibition of this famous artist’s work in the National Gallery of Victoria. The students’ warm ‘merci’ to all the teachers at the end of the afternoon was proof positive of the success of this venture.