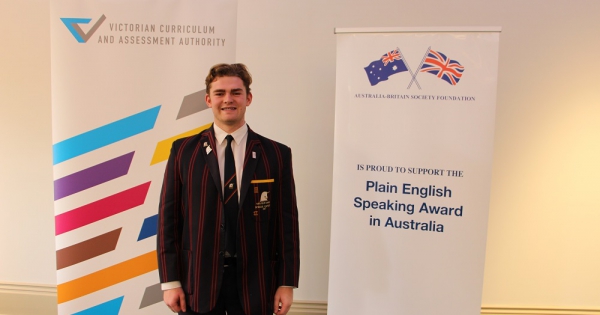 In one of our proudest achievements so far of 2017, School Captain, Noah Kent, represented Berwick Grammar School at the VCAA Plain English Speaking Awards. Having won the Warragul regional finals, he went on to present his speech at the heart of educational policy and research in Victoria, the Department of Education and Training at 2 Treasury Place.

He delivered two very powerful and sophisticated speeches, competing against the best speakers that six of our surrounding regions had to offer. His prepared speech explored the complexity of modern feminism, and how initiatives such as ‘female walking signs’ can ironically hurt the movement for gender equality. His impromptu speech examined the implications of ‘learning beyond the classroom’.

While Noah did not go on to the finals, we have been very impressed with his accomplishment in getting as far as he did. He should definitely be commended on his efforts. In his time at Berwick Grammar, Noah has represented us in many events, and this notable achievement seems the perfect way to cap off his extensive secondary school Enrichment experience.

It will be quite a challenge exceeding the bar that Noah has set for the participants of 2018, although it is one that we eagerly look forward to facing.