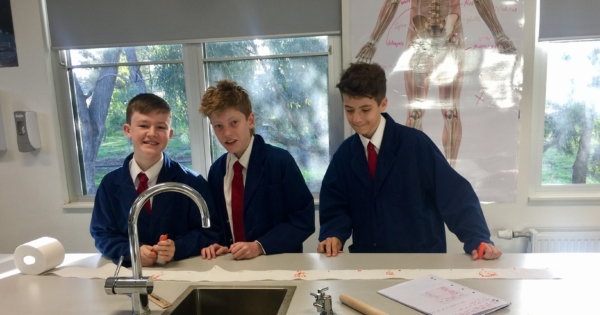 The Year 7’s started off Term 3 exploring the significance of the Night Sky and the Earth’s view of the universe, stars, constellations, planets, dwarf planets, moons, meteoroids, asteroids and comets.

Our Solar System consists of the Sun (our star), and everything that is bound to it by gravity, including the following planets: Mercury, Venus, Earth, Mars, Jupitar, Saturn, Uranus, Neptune and dwarf planets such as Pluto.

What is gravity you might also ask? You will have to stay tuned for next time.

7A and 7B embarked on a mission to construct a scale model of the solar system that represents the distance between the plants.

They were provided with the following materials:
-300-sheet roll of toilet paper
-Marker
-Small stick

Students placed the small stick through the centre of the toilet toll and held it at either end so the toilet roll could unroll smoothly. At the very start of the first sheet they drew and labelled the Sun.

They were then given the following clues in order to calculate the number of sheets needed to mark the distance from the Sun of each of the planets:

What do YOU think the calculation is required to work out the number of toilet sheets needed to mark the distance from the Sun of each of the planets?