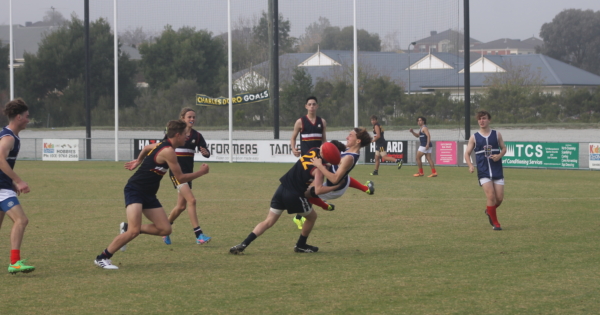 On Monday 23 April, a combined Year 8 – 12 BGS football team took part in our annual fixture against a touring team from St Phillip’s School from Alice Springs. This is the fourth time the two schools have competed in the event and as always it was a very competitive game played in the right spirit by both teams. The visitors jumped our boys in the opening term kicking 2 early goals and lead at the first change. The second term saw a more accountable BGS outfit, and led by a strong midfield of David Charman, Joel Clausen, Jake Bernard and Mitchell Hughes our boys arrested the momentum and outscored our opponents for the quarter to have a narrow lead at half time. The second half saw the game open up, and the run and carry of Mason Bursill and Riley Clark allowed for faster inside 50 entries and forwards such as Cooper Wright, Ben Cross, Jesse Busacca and Caydn Lane were able to capitalise on most occasions. Although BGS lead for almost the entire second half, a goal in the dying minutes of the match to St Phillip’s saw them emerge as one point victors when the final siren sounded.

A big thanks to everyone who was involved on the day.