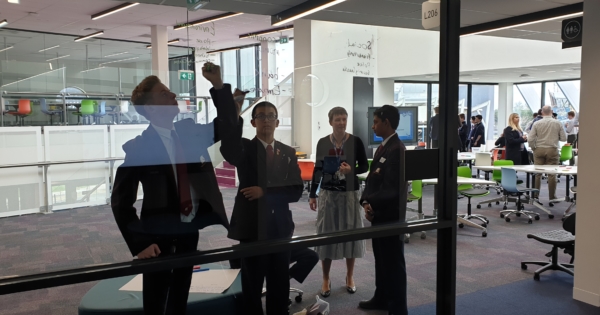 Earlier this term, eight boys from Year 9 and 10 travelled to Casey Tech School for an introduction into the Thales Design Competition, an international competition wherein students focus on using advanced sensor technologies to connect to Thales’ vision to “make life better and keep us safer”. The two teams from Berwick Grammar explored the complex technological basics and ideas revolving around sensor technology throughout the day.

In the initial half of the day both teams got a look at elementary block coding, multiple sensory robots, and rudimentary robot building. Robots utilising a variety of sensors such as light, colour and sound sensors gave us ideas about how we might employ such sensors in real world environments. While the introduction into block coding and robot building was new to many of us, it too gave us interesting ideas into how to use such technologies.

After a buffet lunch, the teams were taken upstairs to the office space where the collective group brainstormed about themes of safety, security and sensors. After the brainstorming session, each team used window markers to unpack ideas for issues to solve and decide on a prototype that the group would submit for the competition. The two teams will continue to work independently back at school to complete our competition entries. We expect to complete the project before the end of Term 3 and are aiming to win the two thousand dollar prize to purchase new equipment for BGS.