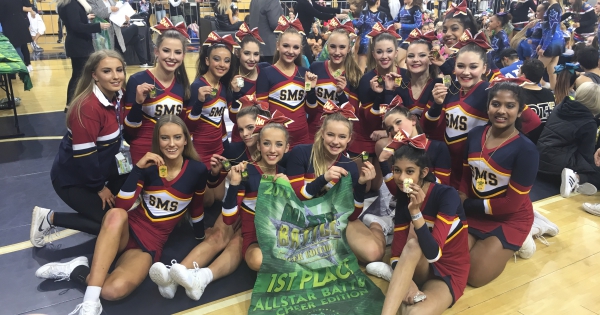 On Saturday 12 August, two of our SMS Senior Cross Country athletes competed in elite races. Leah Macdonald of Year 12 represented Victoria at the School Sport Australia National Championships in Hobart. She placed 20th overall in the U20 6km event and was the second placed Victorian. Olivia Weston competed for the Girls Sport Victoria representative team at the all associations’ carnival. She was the 3rd placegetter overall and the second for GSV in a time of 14:14 for 4km, helping GSV to a convincing victory over the APS and AGSV associations. Olivia will also run for Victoria at the Athletics Australia Nationals in Wollongong on August 26.

Two St Margaret’s students represented the school at the School Aerobics National Finals at the Gold Coast Convention Centre on Sunday 6 August. Ashlee Duhau placed 3rd overall in her category and Tahlia Lane placed 5th overall in her category. Congratulations to the girls on an incredible effort at national level. Thanks to coach Katie Martin for her dedication to the aerobics program and for training the girls each week. The aerobics team now sets their sights on their next competition in October, the School Aerobics Spring Challenge.

On 11 August, the SMS Unicorns team won gold in the Secondary School category at the All Stars Battle Cheerleading Competition held at the State Basketball Centre. The team has been training twice a week since the start of the year developing their stunting, tumbling, pyramid and dance skills. The girls performed extremely well, mastering some very difficult stunts and represented the school well. Congratulations to Year 11 student Charlotte Curtis for all of her hard work and dedication in coaching the team and leading them to victory.

St Margaret’s School competed at the Volleyball Victoria Schools Cup over 3 days from July 28-30. Schools from across the state converged on Dandenong Stadium for the huge event. SMS performed strongly but went down to eventual gold medallists Maffra in the quarter final before going on to win their final two matches to place 5th overall in Division 1. Congratulations to team members: Grace Davis, Maddison Frahamer, Madeleine Stubbs, Ruby Conlan, Chloe Bernard, Lauren Castricum, Ellie Nichol, Elizabeth Day, Alisa Johnson, Caitlin Taylor and Xingtong Huang who all participated at different stages throughout the tournament.