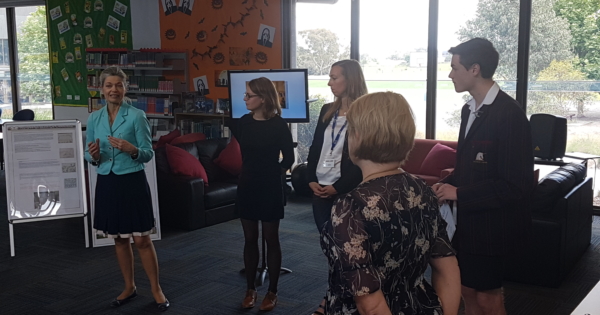 The occasion was indeed solemn on Friday 16 November 2018, when Berwick Grammar School hosted the first edition of the SMS/BGS Global Awareness Award in presence of the French Consul, the Attaché for Education Matters of the French Embassy. I would like, however, to start this article by highlighting the enthusiasm of five Year 10 French students – Tristyn, Daniel, Ned, Navaal and Oliver – who braved unchartered territories and came up with idea of creating a fundraiser for students who want to go on exchange.

The idea stemmed in our French classroom at BGS during a French breakfast after a skype call to Mme Vinciane Thomas, Director of AFX. Heads were buzzing with ideas, dreams, and the many questions about how to reach what seemed like an unreachable star.

The students, however, were not daunted by the challenges they could meet. They were ready to discuss their project with Dr Middleton, the Head of Berwick Grammar School, Mme Rome, the Principal of SMS/BGS, Mme Welton, Head of Languages. They even planned to meet Mme Thomas and to go into the city to the French Consulate. There seemed to be no limit to what their love of the language was dictating them to do.

Emails were exchanged with all parties concerned and in one of them, mention was made by the French Consul of the growing interest of the French Embassy under the leadership of the Office of the Attaché to Education, Mme Flavie Coulbault, to work with schools which had an interest in Global Education.

Global education – the word was out and rang loud to their ears. SMS/BGS indeed champions global education as part of its curriculum! It was then clear to them that they could enlist their interest in the field and be part of this wider network which the French Embassy wanted to set in place. More emails were exchanged, more discussions happened between the Principal and Mme Coulbault and the SMS/BGS Global Awareness Award took shape. It is a project open to Independent Schools in Victoria where participating students are asked to define the importance of global education as part of a French Exchange Program. Invitations were sent to five independent schools to participate in the first edition.

Words were put to paper, endeavours defined, lines of action envisaged. Navaal and Oliver fronted the challenge and took part in the competition.

On Friday 16 November at 2.00 pm, BGS was ready to host our guests, Mme Myriam Boisbouvier-Wylie, French Consul, Mme Flavie Coulbault, Attaché at the French Embassy, Mme Vinciane Thomas, Director of AFX and the students from SMS. All were anxious to know who was the winner of the inaugural SMS/BGS Global Awareness Award.

Ned Matin offered a delightful introduction to the ceremony by singing Gabriel Faure’s Pavane. Mme Rome defined the necessity for global education to be part of education curriculum in Australia and why SMS/BGS had started on that course of action. Mme Boisbouvier-Wylie explained the interest that the French Embassy took in supporting the project and Mme Coulbault reinforced the cooperation that the French Embassy wants to establish with secondary schools in supporting such initiatives. She also announced the name of the winner after first underlining the great quality of the essays in competition.

Oliver Ward was declared the winner of the first SMS/BGS Global Awareness Award.

Messieurs, chapeau bas for your enthusiasm, dedication to your studies and your love for the French language. You are great ambassadors of BGS, ‘good men with a ‘global awareness.’