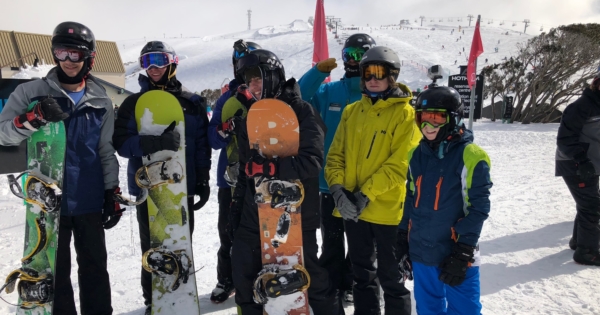 In the dark of the early morning, the alpine enthusiasts of Year 10 to 12 headed for the hills. Students from both campuses were looking forward to taking advantage of some of the best snow conditions of the season with a weekend away on the slopes.

Arriving at Mt Hotham everyone was impressed by the central positioning of the accommodation. Quick unpacking followed by collecting hired equipment, allowed everyone to make the most of their first skiing or boarding lessons by mid-afternoon. From the experienced to the beginner, there were many stories to share over dinner Friday evening.

Snow fell for the best part of Saturday, lowering visibility but not deterring students or staff from spending their day out in the thick of it. A hearty meal and a few rounds of cards allowed many stories of achievement and resilience to be shared that night.

The party awoke to a magnificent sight Sunday morning. The resort was blanketed in many centimetres of fresh snow and the sun was out. Determined to not waste a minute of this opportunity everyone was back out on the slopes until early afternoon. Gear was then returned and the journey home began.

Skills were learnt and refined, friendships forged and strengthened, and independence and determination displayed by all. The staff were most impressed by the conduct and positivity of the students and look forward to more snow adventures in 2019.