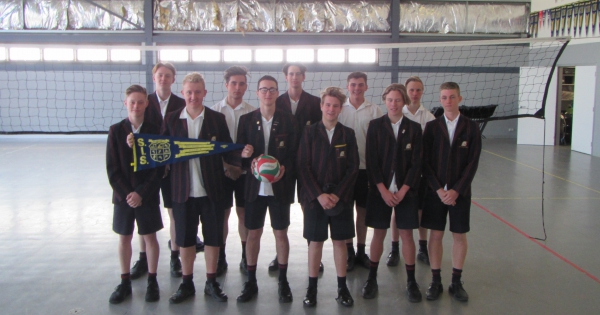 Term 4 saw one pennant and two near misses for our SIS Weekly Sports teams. Our Junior Tennis Team lead by Nick Hoghton, Dylan Wijayakoon and Patrick Mohanraj won all but one of their matches, finishing a close second to eventual pennant winner SFX Berwick. The junior Soccer team led by Caydn Lane suffered a similar fate where they needed to win their final game against Cornish to finish on top of the table. Unfortunately a draw was all that we could muster and finished a respectable second for the season. The most successful of our sports teams for term 4 was the BGS intermediate volleyball team who finished the season undefeated and secured the SIS Pennant for 2016. Convincing victories against S.F.X. Berwick, Cornish College and Padua Rosebud demonstrated the vast improvement in this team from their first training session in early term 4. The BGS team played a very impressive brand of volleyball with digging setting and spiking being a part of almost all rallies. Oliver Nicholls did a great job as captain of the team, and the consistent serving of Ben Easton, Jake Robertson and Aidan Ferreira, combined with the powerful hitting of James Cairns and Ryan Holland meant that almost every set for the tournament ended with BGS as the victor. 2016 has been a very eventful and successful year for BGS in SIS Sport, and with trials already under way next year’s squads we hope that 2017 can be equally enjoyable and fruitful for all involved.