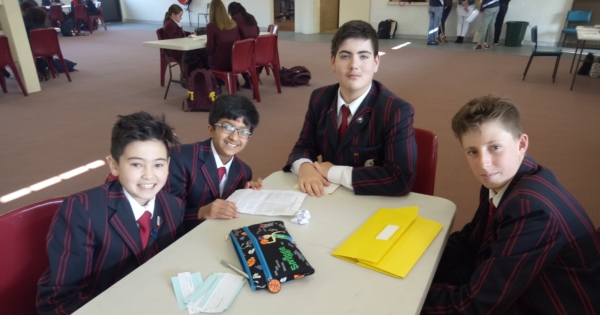 On Tuesday 1 May, four of our aspiring public speakers from Year 7 participated in the SIS Public Speaking Competition, which was hosted at John Paul College in Frankston.

As our Year 8 students who would normally be involved were out on camp, we were provided with a rare opportunity to give two more Year 7 boys a chance to develop their skills and learn from a wide range of speakers.

Speakers discussed a variety of issues, ranging from the influence of artificial intelligence on the future of humanity, to whether Quiddich should be given status as an official Olympic sport.

Our boys held their own in the competition, with speaker scores comparable to their older counterparts, from a range of elite schools within the SIS Group.

According to participant, Declan Coleman:

‘Doing (this event) was quite an experience in improving (his) vocabulary, helping (his) public speaking in general, and expanding (his) knowledge… (he) would highly recommend this (event) to anyone who wants to improve themselves in the art of public speaking.’

These boys are thanked for their dedication and effort in preparing for this event, and for the outstanding manner in which they represented the school. The organisers were impressed by their manners and willingness to help clean up at the end of the day.