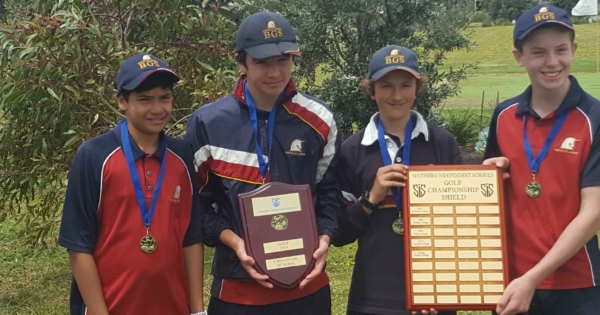 After seeing gradual improvement over the past couple of years, our BGS golf team headed to Cornish College with some confidence, but could not have dreamed of what they were about to achieve.

With students from Years 7 to 9 participating, we were giving up age and experience to many schools with VCE students participating, but our young team of Brodie Mack, Hugo Gaulke, Jack Scarborough and Seth Lindsay showed no signs of being intimidated, birdying the first three holes in the four-ball Ambrose format. With all four players contributing strongly, there were no weak links in this chain, and the boys continued on with three more birdies along with two pars to finish six under par in the nine hole event.

The next best score on the day was three under by Padua College whose team of four boasted multiple players who played off single figures, proving that a champion team can defeat a team of champions. When handicaps were taken into account, our nett score of 17.25 was the lowest ever seen in this competition and a new SIS Record. Second place was Padua with nett 21.31 followed by Balcombe Grammar with Nett 21.75. It truly was a convincing victory. With the boys already setting their sights on going “back to back” in 2020, there are exciting times ahead.