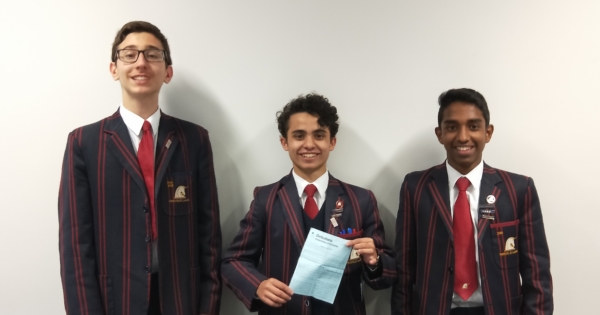 On Thursday 12 September, Berwick Grammar School were lucky enough to have three teams participating in the semi-finals of the SIS Debating Competition.

Regrettably, our Junior Team (Jake Giddins, Jeremy Mohanraj, Achila Perera, Logan Ridoutt and Krish Gupta) lost by a single point, so will not be progressing any further in the competition. While it was undoubtedly not the result they were hoping for, they were able to benefit from watching some higher-level debates, so will hopefully have learned something valuable from the experience.

Congratulations, however, are in order to both our Senior (James Agahi, Oliver Ward and Max Walton Briggs) and Intermediate Team (David Guzenko, Sebastian Nugara, Ovin Jayawardana and Gathika Withanage) who will be proceeding through to the Grand Finals of the SIS Debating Competition, which Berwick Grammar will now be hosting early next Term.

Our Seniors, debating whether “we should deny smokers the right to Medicare”, won by three points. Our Intermediate Team, debating whether “organ donation should be opt out” won by an astonishing five points (a huge margin for debating).

With two very strong teams, we are in strong contention for a shield this year. Best of luck to these boys in the Grand Final.