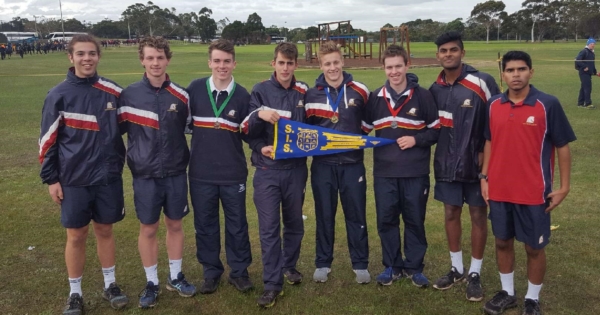 On Tuesday 28 May our squad of 36 boys headed to Baxter Park to compete in the annual SIS Cross Country Carnival. Conditions were wet and miserable but they didn’t dampen the spirits of our Under 13 runners who got off to a solid start with James McCurdy being the first BGS runner across the line in 6th place. The Under 14 race saw all 5 runners work extremely hard but only Jack Scarborough being able to crack the top 10 coming in 9th place.

The under 15 team saw some more great individual performances with Sam Hoghton getting a second place medal for the second year in a row, and Ovin Jayawardana and Will Hetherington both finishing in the top 10 with 5th and 8th placings respectively. With all other runners in this age group not far behind we were able to claim our 1st Pennant for the day as Under 15 SIS Champions. Gavin Li led the way in the under 16 race, crossing the line in 5th place and our only top 10 runner for that age group.

Another Pennant was won in the Under 17 race where Nick Hoghton claimed a medal for the second year in a row, this time crossing the line second to gain a Silver Medal. Cooper Wright was not far behind in third, and Matthew Merrilees of year 10 placed in 4th, a massive effort when running above his age group.  With Max McCahy finishing 9th and Jared Handley pushing through some soreness to come in 18th it was a convincing win by this age group.

The best was saved for last on this day though, with a completely dominant display by our Year 12 students in the Open age group. Joel Clausen led the way, showing tremendous improvement from last year’s 9th place to win the race and secure the gold medal in his final Cross Country race for the school. The success didn’t end there though, with Rylan Hall coming in 2nd place and Mitchell Hughes 3rd to give BGS the trifecta on the podium at the presentations! Our depth was further demonstrated with Tom Murray finishing 4th, Ashley Chandrasinghe 6th and Mason Bursill 9th giving us 6 of the top 9 runners in the senior race.

All competitors showed great determination on the day and represented their school extremely well. After great performances at the Swimming and Cross Country carnivals our attention now turns to the SIS Athletics Carnival at Lakeside Stadium late in Term 3.