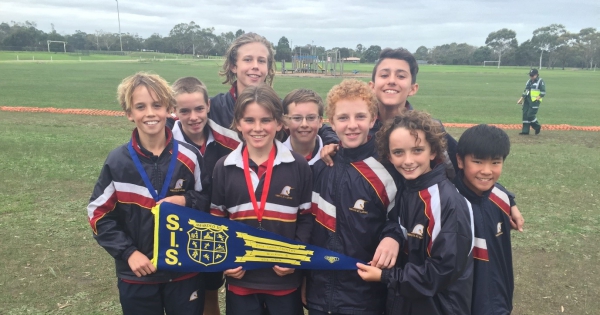 On Tuesday 17 May the Berwick Grammar School Cross Country team travelled to Baxter Park to compete in the 2016 SIS Cross Country Carnival. After finishing in the top ten for their age group in the BGS Cross Country Carnival earlier this term, our students approached their races with great optimism and enthusiasm. Against some larger schools with greater student numbers our boys performed very consistently throughout the day.

There were many ‘top 10’ performances for the day with Peter Jennings (7th), Sean Dack (8th) and Joel Laycock (9th) leading the way amongst the Under 17 age group. Alex Kraan (11th) was the best of the Under 16’s, whilst Ashley Chandrasinghe (6th) and David Charman (8th) flew the flag for the Under 15 team. Peter Tolan (9th) and Ryan Graves (10th) performed well for the Under 14’s but it was our Under 13 team that ended the day with a bang.

In an amazing result Caydn Lane (1st) and Will Curtain (2nd) gained Gold and Silver medals for their performances, whilst Kyle Chipperfield (5th), Evan Johnson (6th) and Paddy Cross (7th) led to a total domination by this age group and the Under 13 boy’s pennant being awarded to Berwick Grammar School.

Following on from our success at the recent SIS Swimming Carnival where BGS won the Under 13 and Under 17 Pennants, and the overall boys shield this was another successful day for the school and reward for the effort of all students involved.

The final carnival for the year will be the SIS Athletics Carnival at Lakeside Stadium, Albert Park in mid-term 3. Our Under 13 boys will look to make it a clean sweep of pennants in all 3 carnivals, whilst we are confident of going one better than our second place in 2015 and challenging for the overall boys shield this time around.