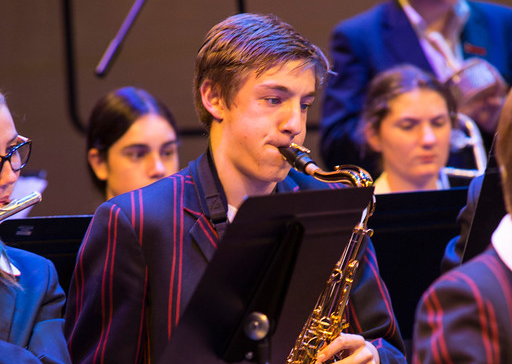 The BIG Night is an annual music and dance concert held at The Drum Theatre in Dandenong. All Southern Independent School (SIS) members are invited to participate in the Concert. This year’s Festival was held on Tuesday 28 March. It was a very special evening as we celebrated 20 years of this wonderful event.

Forty boys from Year 7-11 participated in three days of rehearsal in preparation for the concert. The combined ensembles this year were the Senior Concert Band, Junior Concert Band and Choir which were directed by teachers from various schools, including our very own Music teacher, Mrs Robyn Hambly. Along with the combined ensembles, each school is able to contribute one ensemble from their school to perform in the evening concert. This year the Saxophone Ensemble was given that honour. Our Senior Guitar Ensemble also had the pleasure of providing music in the foyer as members of the audience arrived.

Overall, it was a fantastic experience for all those boys involved. The chance to play music for three solid days and concentrate on developing playing or singing skills really allows for improvement to occur. Special mention goes to Mrs Robyn Hambly who conducted the Senior Combined Concert Band, and to Mr Mark Mason who helped supervise the boys during the concert.