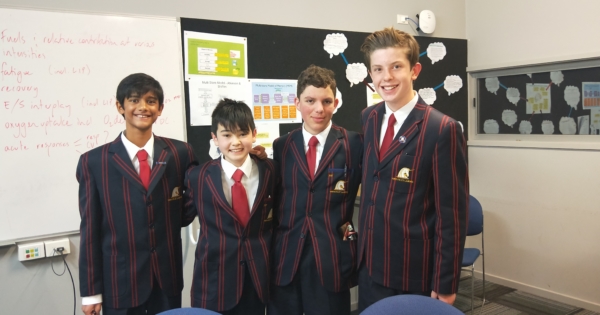 On the evening of Thursday 23 May, the debaters from Berwick Grammar School participated in Round 3 of the DAV Debating Schools Competition for the Berwick Region.

This round of debating was relatively successful, with half of our teams securing a win. There were some significant wins to celebrate though.

We enjoyed another victory from our A Grade team, consisting of James Agahi, Oliver Ward and Max Walton Briggs. At this stage, this team remain undefeated. Best Speaker for this debate was awarded to Oliver Ward.

D Grade Team 2, consisting of Jake Giddins, Karthik Kalaiselvan, and Achila Perera (supported by Declan Coleman) secured an overwhelming triumph over their counterparts at St Margaret’s, with all speakers awarded a notable score of 77. Karthik was also awarded Best Speaker for the debate. The boys were pleased to hear that the adjudicator thought that they might be ‘the best team in the region.’

Best Speaker was also awarded to Sebastian Nugara from C Grade, for his score of 76.

There were several close matches, with only one or two points separating us from our opposition. This will hopefully give our boys a close goal to work towards for the last two rounds of the competition.

We would like to thank all the team members who despite not debating, showed up to support their peers. This speaks to the kind a nature of our boys, and their willingness to support their community through triumph or adversity.