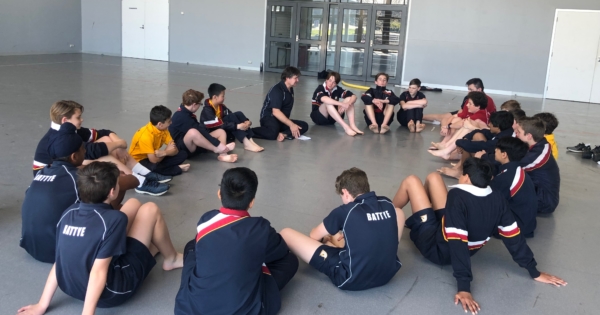 There is a “diamond” at the heart of every Rock and Water session, Mr Ruzzier tells the boys.  And the key message of our most recent session was – FOCUS.  We need focus in life in order to be in control of our emotions, and indeed to decide which of Rock or Water to use in a stressful situation. And it isn’t binary – the situation in question dictated the use of both Rock and Water for the best outcome.

The session began with a real-life example, and boys were able to talk to a young man who used Rock and Water effectively when confronted aggressively in public.  This showed them a powerful personal application of these ideas.

The boys then played a range of games that encouraged them to focus, including a chasing game with pool noodles, and one-on-one attempts to hold a straight face while others reacted to them.  Ashton was particularly good at this.

Then, we played Tunnel of Love.  In two lines boys stood and called out what they liked most about the boy who walked through the center.  Tallis said he felt “weirdly appreciated”.  Tully felt it was a powerful experience as “men don’t know how to say nice things as such”, and Mr Ruzzier agreed this was often the case – men are less likely to compliment each other.  Karthik put it most powerfully – “Men think they need to be Rigid or Strong”, rather than kind or loving.  Fortunately the Growing Good Men Project at Berwick Grammar School works to create emotionally literate young men as future leaders.  What a wonderful experience for the boys.