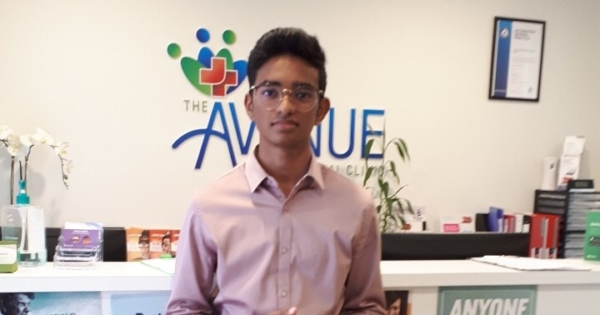 Year 10 Student, Patrick Mohanraj’s shares is speech which he recently delivered to his fellow student on Resilience and his experience whilst on Work Experience.

‘Life is an amazing gift. We get to experience so many different things as human beings and we often take it for granted. Fond memories, friendships, new experiences, the list goes on. But it is also important to know that with all the good that happens in our lives, comes the not so great. Sometimes there are things that are just out of control, and we have no choice but to be, resilient.

Last week was a week of resilience for every person in this room. Like it or not, we all have to fight our own battles every single day and there’s no avoiding it. Whether it be something as trivial as getting out of bed in the morning or something like preparing for a test or exam that could have a massive impact on your future, we’ve all faced some extreme challenge that can be quite daunting. However, it’s not just the ability to do these tasks that matter, but more rather being able to come back stronger afterwards that counts.

Last week the Year 10s were on work experience in various different industries. I was fortunate enough to be able to work in a clinic for the week and I picked up on some very interesting things. I have been gifted the chance to tell you about my work experience and how it relates to this term’s theme of resilience. However, I won’t be telling you about my own resilience during the week. I won’t even being making vaccine jokes and how they make you resilient to diseases. But rather, I’ll be telling you about the resilience of a lady who we’ll call Elaine. She was a phlebotomist at the clinic, or a person who collects blood for testing.

I met Elaine on my first day of work experience. She was an incredibly vibrant and talkative character, the type of person you wanted to be around just because of how positive they were, and how that also made you feel happier as well. I got to observe her work occasionally throughout the week and I saw the way she interacted with patients. She was extremely invested in the lives of other people and made sure the patient was rid of any sort of anxiety they felt, whether it be about the results that would come from the test or even the scariness of getting a needle. In her own words ‘I’d like patients to leave this place happier than when they first came in, I mean, as part of my role at this clinic I collect blood, but as part of my role as a person I should try make people’s lives better.’ I’m actually quite grateful I got to speak today because this quote is definitely worthy of recognition.

We had a patient come in last Wednesday, an elderly lady, to have a blood test so she could get her lymphocyte numbers checked. For anyone unsure, having a high lymphocyte number can be a sign of Leukaemia, a type of blood cancer. Now I wasn’t there when the lady came in but I arrived maybe about 10 minutes later. And as soon as I walked in I could tell something was off. Elaine looked visibly upset and for me, knowing only her happy, caring, vibrant side, it was quite a confronting thing to face. Luckily no other patients had come in for a while and she told me about the lady who had come in and how she could potentially have leukaemia, and how her own father had died from leukaemia 2 years beforehand. She was especially upset as her dad had kept it secret for as long as possible and when she did find out, her father died two weeks later. She booked a flight to England to visit her dad but it was too late. She never got to say a final goodbye to a person she’d adored all throughout her life and that understandably took a massive toll on her.

Feeling sympathy for this woman, she put the blood samples to be tested urgently and the results were delivered to the clinic a day later. However, Elaine nor I were allowed to look at these results as it was confidential information, but the lady had come in on Thursday to collect the results. The next day, she walked into the lab with a box of chocolates and the happiest smile I had ever seen. And all of us knew at that moment that she was going to be okay and that all was well. Both women teared up as they shared an embrace, while I awkwardly spectated from the corner. Regardless it was an incredibly powerful moment and it made me realise something. When we think of resilience, we think of being tough, bottling up our emotions and just doing what had to be done. However it was at that moment I learnt that although resilience can be some of those things, true resilience is being able to let your emotions shine through during the darkest times and allowing other people to share the burden of your struggles with you, because whether or not two people are related, it’s in our human nature to care for people, and we should truly embrace that gift.’