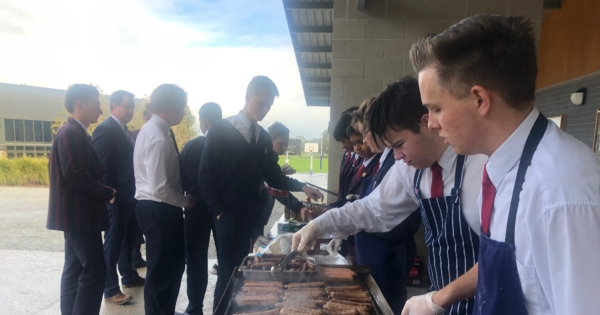 Reconciliation Week sparked a poignant note for the boys at Berwick Grammar School.  While the formal acknowledgement of the week occurred at assembly on Thursday, there were other activities throughout.

Year 11 student leader Angus Bares invited all staff and students into an update on the Reconciliation Action Plan, sharing ideas about indigenous spaces in each campus, as well as plans for a future camp to learn more about the heritage and culture of our first Australians.

Sports Captain Riley Clark shared plans for a football jersey with an indigenous theme which could be used at special games and on dates of national significance.  This idea captured the imagination of many boys, who have already attended meetings around the planning of the jersey, all of which will need to receive the final approval of Murrundindi, Aboriginal elder and great friend to St Margaret’s and Berwick Grammar School.

Finally, on Friday the SRC ran a BBQ to raise money for the Indigenous Literacy Foundation, an organisation which aims to provide books to indigenous children in remote communities.  We take up this cause again in September with The Great Book Swap, so it is great to see the boys continue their support at other times throughout the year.  Many thanks to the senior boys who gave up their time not only to man the barbecue, but also to train new SRC members in how to run the stand.