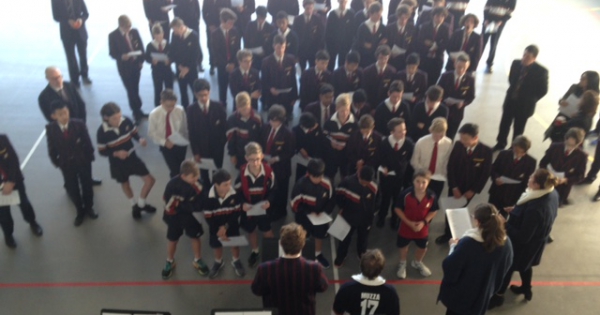 Term 3 began with a flurry, with boys rehearsing for the House Performing Arts Festival. Leadership from the musicians of each House meant that the Music Department was filled with students on a daily basis, preparing their Group music items and accompanying bands for the Choirs. With a Drama skit being the new addition to the Festival, drama students were also busy creating their Movie Themed skits. All the hard work was worth it as each House presented entertaining, dramatic and musical performances.

Boys in Year 8 Classroom Music have spent the first weeks of the term further developing their skills on guitar, keyboard, bass guitar and drum kit. They have now begun working in their bands preparing their chosen 1950’s Rock’n’roll hits.

Preparations for the BGS In Concert are underway. A Soloist from each level is chosen to perform on the night and auditions are currently taking place. All ensembles are working hard in their afterschool rehearsals in order to present a varied program. Berwick Blokes have also begun their preparations for the Concert Opening and Finale. The BGS In Concert is to be held on Thursday 14 September at the Rosanove Auditorium at 7.30 pm. It is a whole school event and promising to be an entertaining evening showcasing the musical talents of the boys. Tickets will be available on the school website from next Monday 28 August.