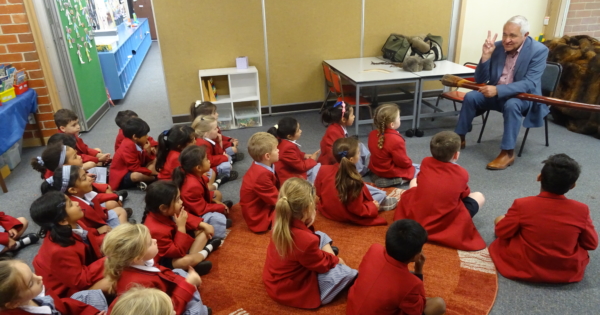 It was with great honour that the Junior School welcomed Murrundindi on Monday 1 April. Students in Prep, Year 3, 5 and 6 were lucky enough to be able to have Murrundindi spend some time with them in their classrooms. In Prep, he performed some musical numbers on his didgeridoo while they danced along. He also shared Aboriginal artefacts and stories with them. The Year 3 students were inspired by the stories shared by Murrundindi and, with his guidance, they drew pictures which incorporated a range of Aboriginal symbols. In silence, as it was traditionally done, the Year 5 and 6 students were taught how to play a game of possum ball. This was very much like netball, but involved some kicking of the possum skin ball too. The Junior School are delighted to have Murrundindi as an active member of our learning community and we look forward to his return in Term 2.