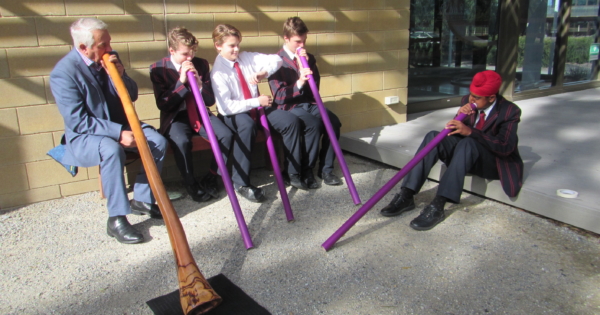 On 30 July, we enjoyed another visit from Wurundjeri Elder, Murrundindi. Murrundindi is the ngurungaeta (head man) of the Wurundjeri, and possesses the cultural canon of his people, as well as the important task of passing on this knowledge to future generations.

He began the morning by teaching the Year 7 cohort about how mathematics operated prior to ‘white settlement’ in Victoria. He outlined the counting systems used, how local Aboriginals communicated distance and explained how bartering between individuals and Victorian tribes functioned.

In Mr Pieper’s Year 7 English class, students learned a new note taking technique (sketch-noting), in order to learn about the Kulin creation stories. Murrundindi was impressed with how well the boys were able to retell his story, and the boys were equally impressed by the storytelling techniques he used. Students were asked to pay attention to pace, pausing, tone and emphasis, to improve their own understanding of how to deliver an effective speech.

Four of our eager Year 7s (Angelo Kalomiris, Vanshdeep Daler, Tully Webb and Tallis Pritchard) were treated to a private didgeridoo lesson. The boys had previously undertaken their first official lesson on Friday 26 July, with lessons continuing every Friday for the rest of the year. They appreciated the chance to learn basic techniques, as well as being given insights into the cultural significance and history of the instrument’s use in Australia. Our hope is that these boys will one day feature in the school’s band, particularly on significant dates for Aboriginal Australians.

Murrundindi also coordinated a small collection of eager arts students as they devised illustrations to be used in our school’s official Reconciliation Action Plan (RAP). Additionally, he worked with a smaller group of dedicated Year 11 and 12 students to design football jerseys for the Berwick Grammar football team. In these sessions, Murrundindi explained the cultural significance of common Wurundjeri symbols and outlined the core stories and perspectives important to the culture. The final designs will reflect these facets of the culture, while aiming to also espouse St Margaret’s and Berwick Grammar Schools’ values of courage, character, curiosity and respect.

We would like to thank Murrundindi for sharing his stories and perspectives with the boys at Berwick Grammar, and look forward to his next visit in 2020.