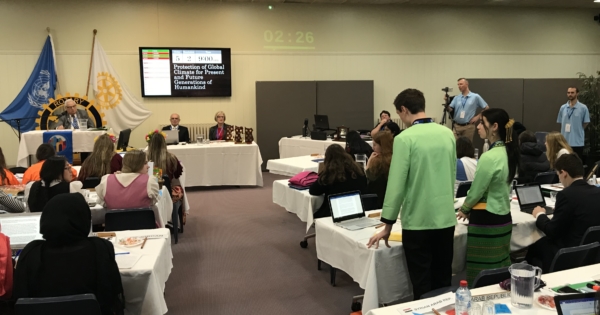 What an absolute privilege it was to watch four of our Year 10 students speak at the Rotary District 9820 Model United Nations Assembly (MUNA). This event has students work in delegations of two, representing the views, politics and culture of a nominated UN country. Over the weekend, students investigated and debated real world resolutions of the United Nations General Assembly, such as ‘The Situation in the Syrian Arab Republic’, ‘Refugees’ and ‘Intensification of Efforts to Eliminate Violence against Women and Girls’. The objective of MUNA is to encourage young people to learn respect and tolerance for people of all races, religions and nationalities.

This is a very significant achievement for the students involved. They competed against 24 other teams, demonstrating exceptional team work and intellect, as well as outstanding public speaking skills. It was also wonderful to witness the level of courtesy and respect that they showed to their competitors, resulting in the formation of new friendships through this shared experience. MUNA is an excellent example of our school’s commitment to foster students who are active members of the global community and who engage with the world ethically and with intercultural understanding.