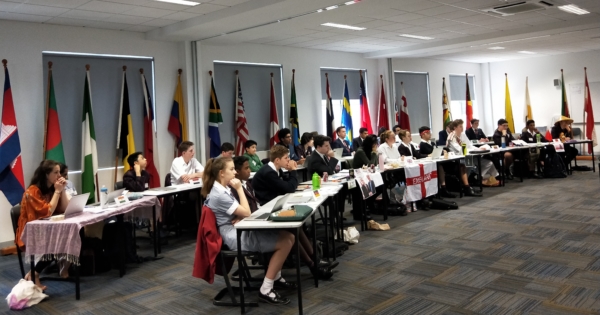 On Monday 21 October, St Margaret’s and Berwick Grammar School hosted our second Model United Nations Assembly. This event saw students from both our senior campuses debating global political matters in a simulated United Nations General Assembly. Resolutions concerned the Protection of Journalistic Freedoms, the situation in the Syrian Arab Republic, the economic and human rights situation in Venezuela and the protection of migrants impacted upon by climate related disasters.

This complex exercise in international relations requires students to debate global events from the perspective of other countries, articulating and defending the sovereign national interest of their chosen nation-state. This year our students represented Brazil, Venezuela, the United States of America, the United Kingdom, Iran, Syria, Mexico, China, France, Turkey, Japan, India, Germany and Saudi Arabia.

The event was opened by the Member for Gembrook, Mr Brad Battin. Brad spoke about how students can get involved with both domestic and international politics, and detailed his experiences working with the Fred Hollows organisation (a charity that seeks to cure preventable blindness throughout developing communities). Within this presentation, he highlighted the important role that Non-Governmental Organisations perform in the international community. He provided his insights on the economics behind how charities are run. He highlighted the often-immense operational running costs of some charities and encouraged students to think critically about where to best spend their charitable donations.  He also discussed the importance of personalising philanthropic assistance to communities to consider their unique cultural and practical circumstances, rather than taking a one-size-fits-all approach to assisting vulnerable communities. Brad is thanked for kindly giving up his morning to support this initiative.

Later that afternoon, Mr Gary Newton, former Australian radio personality and outspoken paralytic polio survivor, provided a highly personal account of his life story to our students. Gary offered a profound message of the importance of showing resilience and maintaining optimism in the face of adversity, as well as a humorous assessment of the global anti-vaccination movement. He spoke about the important work that organisations such as Rotary International are doing worldwide to eradicate diseases such as Polio. His humour and heart-felt messages were a great way to break up the day. Gary is thanked for taking the long drive from Geelong to present this important message to our school.

The event was adjudicated by two special guests from Rotary, Mr John Caruana, who has worked tirelessly to provide Model United Nations to Australian students on a national scale; as well as Mr Alf Reina, who had an extensive career working with the United Nations, the Australian Government, Non-Governmental Organisations and International Organisations working in the fields of migration management, human rights, refugees, peacekeeping and development. Both of our guest adjudicators are thanked for giving up their day.

We would also like to thank the many staff who volunteered to assist with this event, and especially our Principal, Ms Annette Rome for helping to close the event and hand out prizes to the winning delegations.

This year, we particularly congratulate the delegation from Germany, comprised of Jackson Wright, Ovin Jayawardana and Brianna Munns. Germany were awarded Best Overall Delegation and the Peace Prize (which is awarded to the delegation that works best towards achieving cooperation within the assembly).

All students are thanked for their efforts and dedication in preparing for this event, and for the exceptional quality of debate they presented on the day.