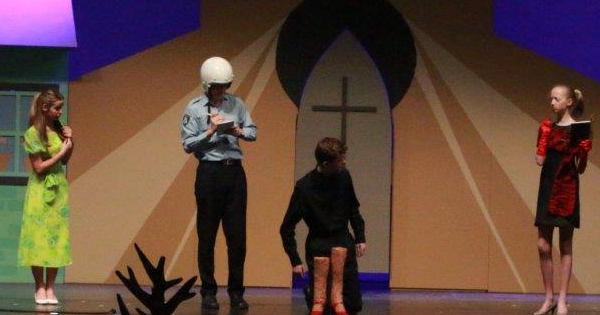 2017 saw Performing Arts take a new direction at St Margaret’ and Berwick Grammar School with the performance of Matt Cameron’s absurdist play ‘Man the Balloon’. With a quirky and off-beat storyline commenting on the various subcultures of our society, students from both campuses did this play justice with their commitment, enthusiasm and outstanding acting brining a new dimension to this show. Berwick Grammar had the most number of boys involved from previous years, highlighting the growth of Performing Arts at the school. The eccentric characters of the colourful town were played by students from Years 8-12, accompanied by townspeople who hula-hooped, played with yoyo’s and danced. Everyone involved had a fabulous time, with new friendships formed and lots of laughs had. A special thank you to all involved in the production from choreographers to set designers, props and backstage helpers. We could not have put on such an extraordinary performance without you. Performing Arts has a bright future at the school and we look forward to seeing more students involved in future productions. St Margaret’s and Berwick Grammar Schools production of Man the Balloon was colourful, bright, unconventional and explosive…to say the least!