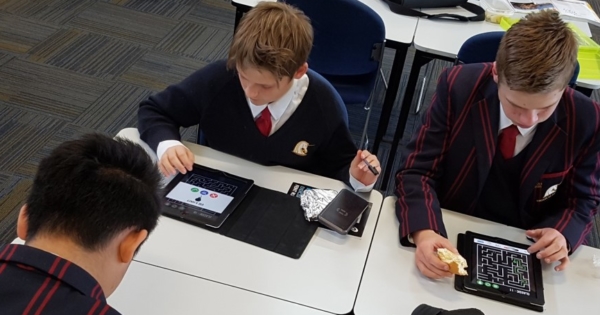 To celebrate this year’s Library and Information Week at Berwick Grammar, and its theme, Find yourself in a Library, a number of puzzle and maze activities were held at lunchtime.

A week long Guess the book Title hidden in a cryptogram display had students from all year levels (and staff) scratching their heads as they tried to work out which book title was hidden in the pictures.

There was a huge bucket of lollies as a prize which was awarded at the end of the week to Ryan Xie of Year 9 who had the highest number of titles correct.

On the Tuesday 22nd May, the Library hosted a heated battle on the IPADs at lunchtime.

More than 20 boys from Year 7 to 10 were engaged in using their spatial reasoning skills to compete in a Maze app contest,  in keeping with the Find yourself in a Library Theme.

Our joint winners with over 50 mazes solved were: Victor Cai and Oliver Ward both from Year 10 and Xavier Kusli of Year 7.

But the most popular (and loudest) activity was the Library Scavenger Hunt held on Thursday 24th of May.

In this event, students who had nominated a team of up to three participants were given 10 bookmarks with a clue on each such as Find a graphic novel with a one word title or Find a book with a face on the spine.  The boys then raced around the Library finding the items and the first team with all 10 correct items in their basket was the winner.

An enthusiastic team of Year 9 students consisting of Callum Borthwick, Evan Johnson and Ryan Xie triumphed. When collecting first prize of a large tin of chocolates they celebrated with a ‘Usain Bolt Style’ salute.