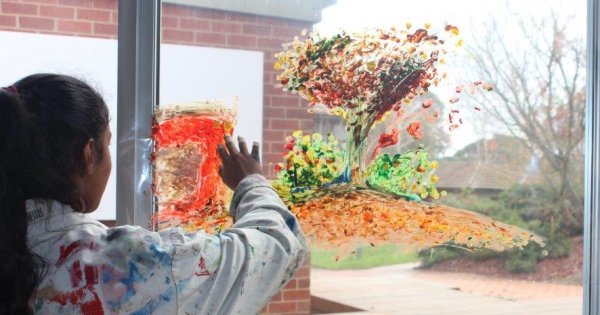 Thursday 25 May dawned grey and gloomy with the radio forecaster announcing ‘A bit of a grey day ahead’. However, there was nothing grey about many of our students and staff. They added the recommended ‘splash of international colour’ to their smart casual dress to celebrate not only the languages taught at St Margaret’s but also the many other languages spoken in homes in the school community. Many Year 7 and 8 girls even came to school dressed in their national costume or wearing a colourful emblem representing their family heritage and culture. Years 7 and 8’s participated in a special program of different cultural workshops and The Lunch Box, in its transformed and decorated state as La Cantine, provided different choices of international food for the whole school.

For Year 7s the day started with the challenge of reciting their French poem to an examiner from the Alliance Française followed by participation in a parade as their famous person in Chinese or French culture, when they used their languages to introduce themselves as that person to the adjudicators.

The quotes below are from the reflections on the day, written by Year 7 students, are testament to the success of Languages Day 2017 and also reflect that our students enjoy the challenges that new learning experiences provide.

I took part in the Chinese Fan Dancing Workshop, the instructor we had, Cindy, was very professional. It was challenging for me but I liked it as it was something new. Ivana Gudelj

Cake decorating was so much fun, considering I was able to reflect on ideas and create them. Brianna Munns

I really enjoyed the storyline of the film Belle et Sébastien and I could understand some of the words that they said in the movie which was really cool. It was my first time watching a French movie and I would love to watch more.  Shara Shamoun

Reciting the French poem helped me get through challenges and test my courage. I had to be brave and perform a poem in front of an examiner! Chiara McConchie

This French Impressionist Art workshop introduced me to a different side of painting that I really loved and will continue to use these techniques for future paintings. I thoroughly enjoyed the film, despite it being totally in French I understood it completely and am glad I was able to watch it. It taught me not only the significant historical events of France (WW2) but also about the French people’s nature and way of living. Claudia Eibl

I really enjoyed the Global Grooves workshop, listening to music from all over Europe, and learning a couple of interesting dances to go along with them. I also found out some facts about the culture of the people from France, Canada, Spain and many more places.  Soumya Rajendran

It was very thrilling to learn martial arts, something I haven’t ever experienced in my life. Our teacher and his assistants were very kind and thoughtful, their actions were easy to follow and the things they taught were very fun. Suzy Zong